Waqfs in Old Town Sarajevo: A beautiful legacy that still runs strong in the Muslim community Waqfs in Old Town Sarajevo: A beautiful legacy that still runs strong in the Muslim community

It was quite something to walk into Old Town Sarajevo on that first day with the Cambridge Muslim College (CMC) Tour in 2018. They gave me my initial introduction to Bosnia and to the astounding collection of waqfs in Sarajevo, coming across them one after another. A waqf means to: put a stop on a property so it can no longer be sold, gifted or inherited and it is dedicated permanently towards a charitable or good cause. The last time that I had heard of a waqf was in high school during Islamic studies and there has always been a special joy for me in the thought of a waqf as it is such a noble idea that embodies the spirit of good character and faith.

I had the pleasure to hear Dr. Ingrid Mattson speak to us during the tour on the history of waqf and how it provided a basis of so much of Islamic civilization. It is with the utmost pleasure and gratitude that I share my notes with you here. So, a waqf in an urban setting usually meant an income-generating property, so it could be halal property that was being rented and the rent used, or it could be a halal business. In areas that had agricultural lands, it would be the land and its income. The money would be used for all sorts of initiatives that are for a purpose. Dr Mattson telling us the magical history of awqaf

There were many categories of initiatives supported by a waqf such as infrastructure, now built by governments, as well as cisterns, bridges, and roads. Those were built and maintained by awqaf so you wouldn’t see a beautiful building fall into disrepair. The caravansérai where travelers for religious knowledge, trade, or hajj and Umrah would stop at to rest. Schools at all levels from school age to great universities as well as libraries were also founded, maintained and staffed by awqaf. One could establish a waqf for a chair to teach fiqh or to teach Hadith, or a certain topic. Ribats, cemeteries, soup kitchens, shelters for abused and runaway slaves, shelters for abused women, widows, and orphans, and general sanctuaries for those who needed it. There were even awqaf for animals and birds.

There were awqaf for things you wouldn’t think of unless you lived in those contexts. People knew their environment and looked where there is a need and would provide for that need. It was only possible because they lived with those people in need and kept their eyes open. They cared about people and paid attention to what was happening and used this really powerful institution to respond to them.

Omar Ibn Al Khatab peace be upon him, was the first Muslim to create a waqf when he dedicated his agricultural property in Khaibar for support of the poor and the needy, both relatives and others. He asked the Prophet peace be upon him what would be the best use for this property. The Prophet’s peace be upon him answer was to make sure not to leave dependents behind without support and use it for a good purpose. Omar peace be upon him set the foundations for so many sound institutions in Islamic civilization. He was creative and responsive to emerging situations all the way from business to the organization of the army. He developed the diwan to organize annual payments for soldiers and those in need, disabled, orphaned, and ummahat ilmuminin/wives of the Prophet peace be upon him, instead of paying himself. So it became a huge distribution center and people and women were comfortable coming and expressing their needs. Other sahaba/companions followed his example and it became a major feature of Islamic civilization.

Muslim Empires had no time to be deeply involved in people’s lives, so that allowed for local rulers and people to start grassroots initiatives and take responsibility for each other and their society. There was a deep religiosity that compelled them to do this as they saw that all wealth belonged to God and was accumulated only through God’s permission, as he is the granter of life in the first place and after that whatever capacities we had; intellectual and otherwise. They also had a compassion for others and they certainly didn’t blame the poor for their poverty. They were also worried about the afterlife and as more wealth accumulated, the more worried they became. There was the belief system, the education system, the customs and the motivation to give. Donors were rulers, sultans, princes, to ordinary individuals who have a small property that they would like to dedicate to support a charity mosque or some other worthy cause. Everyone gave.

Every waqf needed a manager or a director, a mutawalli that made sure these properties were well maintained, continued to generate wealth, and the conditions of the establishment of the waqf are followed. When a waqf is established there is a written document/waqfnama that lists the terms and parameters of how the waqf is to be used. The position of waqf manager is a very important position depending on the amount of money being endowed. It can give a salary but the mutwalli also commands social and economic power. They are hiring and managing people and signing contracts related to maintaining the endowment.

If a project continued to exist, it would be supported by that waqf. The judge would decide who is the right next recipient. If the purpose disappeared and nothing similar was available, then the money would go towards the support of the poor. The judges in traditional Islam were responsible to make sure waqfs were run properly. Before the late ottoman period, judges were moved every few years to avoid corruption as they may form bonds with people in that area. They don’t socialize very much with ordinary people to not be affected. When they were new to an area, they reviewed the list of awqafs in the area and tried to make sure that they were managed well. So, anyone in a position of power was extensively scrutinized to ascertain if they are doing or running the waqf because they love power or out of a true sense of service for others.

There are two major categories of awqaf, public and family ones. So far, we have spoken of the public endowments. The purpose of the second one is that a property is set aside for its founder or family and descendants, so for children, wife, and freed slaves and their descendants. As there was no point in freeing slaves at the time if they didn’t have a means to an income. Most of the family waqfs were established to support the women of the family. One would ask why not rely on male relatives? The reality is that some don’t do what they are supposed to. So, it was important to have a backup plan. Case in point is the story of Yusuf peace be upon him who was supposed to be protected by his older brothers, yet they betrayed him, and they were the sons of a prophet. It’s important to be realistic. The idea was that the more vulnerable in the family would not be cast out. There was controversy around how a family waqf can be made lawful. Many people established family endowments and endowed the family home. If both parents died, the share of the daughter or a disabled child might make them homeless. The condition is to dedicate the home to descendants as long as they live. The women can’t be kicked out as long as they live. Most endowments expire after a few generations as the recipients have no need for them, then it would serve the poor.

Sadly, in the late Ottoman period, the system started to fall apart. The Ottoman rulers in the 19th century and others like Mohammad Ali in Egypt were increasingly trying to centralize religious authority and education and saw independent ulema as a big problem. Their independence came from awqaf providing sources of income. The overlooking of the awqaf was shifted from the local Qadi to the capital. So, judges were no longer independent but government employees. By the end of the 19th century, a ministry for endowments and religious affairs was establishment and the government became the middleman. Taking their cut, paying employees to supervise and it had devastating effects. Firstly, a lot of money was taken and used in the military. Secondly, there was homogenization of culture through the centralization of awqafs, schools, and the state curriculums and programs. This was happening at the same time as European colonization. They came to Asia and Africa to see the resources for their own benefit not to explore and see the world. Around the Mediterranean, approximately half of the agricultural land was established as awqaf. It was very frustrating for the Europeans that they were not available for them to buy and own.

Another interesting set of facts that Dr. Mattson shared with us was that according to archival materials, women were equal to men as donors, those who established awqaf and as managers of awqaf. Even some large public awqaf. They were deeply involved in the public spheres of their community. In the late Ottoman period again, women were cut out of any public role in education or religious life. They were in public life. The Ottomans were looking to Europe for models and they were completely dominated by men, so women disappeared from public life.

Dr. Mattson also shared some points to consider as we move forward with this tradition. She spoke of looking at what really is needed for our communities to flourish and to yes, build mosques and schools but also to come together and have a broader view of our societies and start projects that generate income and serve the diversified needs of our communities. She also cautioned about the need for the expertise to understand what can generate income. We have a lot of amateurism in this area. I loved how she spoke of not necessarily starting something new and how staffing and strengthening existing institutions might be more helpful in the long run for the communities

And now it's time to take you on a journey through time that shows how this tradition of awqaf built the backbone of Sarajevo when it was one of the most powerful centers of trade, culture, education, and military between East and West until the present day where the waqfs still provide service and life to the old city. No wonder I left a part of my heart in Sarajevo that will take me there time and again. Historically a meeting of East and West The East Ottoman side Approved by The Open University to "Train the Next Generation of Muslim Thinkers", the Cambridge Muslim College tour to Bosnia includes visits to: 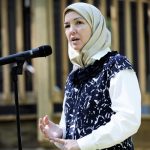 Dr. Ingrid Mattson is the London and Windsor Community Chair in Islamic Studies at Huron University College at Western University in Canada. She was educated in Canada and the United States, earning a PhD from the University of Chicago in 1999. From 1998 to 2012 she was Professor of Islamic Studies at Hartford Seminary in CT where she developed and directed the first accredited graduate program for Muslim chaplains in America, and served as Director of the Macdonald Center for the Study of Islam and Christian-Muslim Relations. From 2001-2010 Dr. Mattson served as vice-president, then as president of the Islamic Society of North America (USA), the first woman to serve in either position. Her writings, both academic and public, focus primarily Qur’an interpretation, Islamic theological ethics and interfaith relations. Her book, The Story of the Qur’an, is an academic best-seller and was chosen by the US National Endowment for the Humanities for inclusion in its “Bridging Cultures” program.