This gem came actually came through another one, as it was Nabila Mango who took me to the fundraiser where Chris Gazaleh was a guest speaker. Nabila is the founder of Aswat ensembles and a pillar in her community for doing good. I was sold from the moment I saw the photograph of the mural he had created overlooking one of the busiest freeways in San Francisco. It stretches across the exterior of the apartment building on 23 Elgin St. next to Octavia Boulevard connector to highway 101. The gorgeous and proud mural Deserves a close up The description that came to mind as I was listening to Chris speak was what “an amiable and principled fellow”… an old soul, as they say with a young spirit who beautifully expresses his vision through graffiti art. I have a soft spot in my heart for graffiti art as it is central to Palestinian art and resistance, especially in the camps and that’s the subject of another post that is sure to come your way one day!

Once I sat down and interviewed Chris, my impression was confirmed, and I saw where it all came from. Chris was a delightful combination of youth and wisdom. The youth was there in his ever-ready smile and his love for hip-hop, graffiti art and the spoken word as a way to express himself and give voice to issues of identity and social justice. His wisdom showed in his love of stories and he grew up with stories of his grandparents and great grandparents and how they lived, both in the U.S. and in Palestine too. What Chris was doing when I met him for the interview 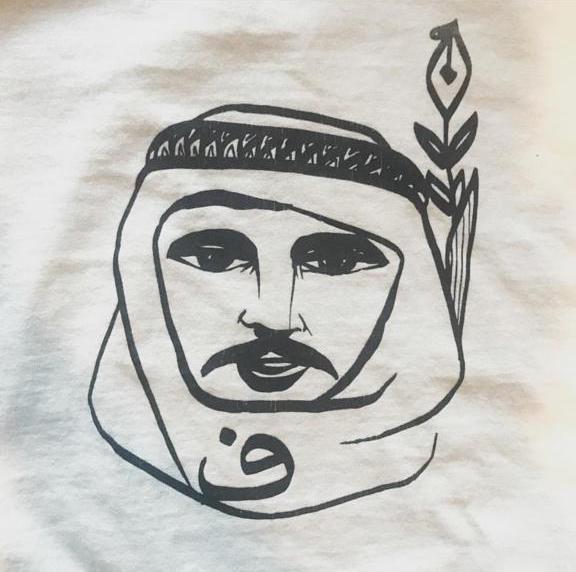 The pen nib as a symbol of the voice art gives

I especially loved when he spoke of how his grandfather travelled from Palestine to the United States to work for seven years in order to  keep his US citizenship, having been born in America. He said that his grandfather was told that if he also served in the US military, then that would expedite his citizenship status. His grandfather of course did both and was placed in the mail room as he had worked at the post office when he was in Palestine. He did such a fantastic job that he was promoted above some of the men who had mistreated him for his different appearance. He had stood his ground and defended himself. Much later on, he said that he forgave them as they were not raised to understand what was out there in the world and therefore they were not able to accept differences better, so what they did was out of not knowing vs. any mean intent. Chris has both his grandfather’s goodness of heart and strength of character and his love of Palestine and of the U.S., so the legacy lives on, strong. His sedo in a younger photo His sedo as a young man His great grandfather far left and other sedo far right The other significant part to Chris’s story and his art, is that he started very young. He mentioned how his parents divorced when he was five years old and he used art as his therapy to transcend difficult times. In Middle School, he had more Arab school mates and that made him more aware of his identity. Then, he became interested in hip-hop and was inspired by listening to Arabic hip-hop in particular which gave him a greater appreciation for the language and a deeper connection to his roots. At the age of twenty one, Chris decided that he wanted to focus on visual arts and started doing murals, sketches and paintings, and with that he took on another artistic form in his toolkit of creative expression.

Chris’s principles shine through in the way that he decides whether he wants to work with someone or not. He considers why he is being asked to do the work and then, what it would be used for prior to saying yes to ensure that the project is aligned with his values. That’s why I was honored when he accepted my request to create pieces to give very special, gifts-of-a-lifetime to loved ones celebrating their Palestinian identity, strength and beauty. At Reem's California for community mural And an art piece at Diyafa restaurant Edward Said mural, one of the first Strong statements of pride in identity and roots

Getting back to Chris and how he creates - as he prepares to start a piece, he thinks of the message he wants to send out and how he wants people to feel looking at it. Then he starts to put together symbols and a structure to represent characters that connect us beyond our daily lives and where an image can carry multiple meanings. And since his art is political, it's challenging to choose the images and symbols that will carry positive meanings and stand against the onslaught of criticism from opposing viewpoints.

He sometimes starts an art piece with a quote and sometimes he draws shapes that become faces then he draws movements around them as if it’s the world and things around them or it can be part of their inner world so it’s their thoughts and busy minds coming out of their head. That last bit was said with a soft chuckle. The principles spoke loud and clear in how Chris expressed more than once that he had always wanted his art and message to be out there, rather than his name. Such gorgeous sense of color The bold black and whites I just want to keep looking at it!

Chris spoke of his upcoming visit to Palestine with eyewitness Palestine, which he is so excited to be embarking on soon, and also of his earlier visits to Palestine. Recollecting on his very first visit in 2007, he could clearly recall how the country had changed him, and  the distinct impression that Palestine and it’s people had made on him as he prepared to leave. He was very sad to have the freedom to leave while others were stuck in such a horrible situation of oppression under the occupation. He also envied them that they could stay and live there in beautiful, beloved Palestine. I loved a story Chris shared of his next visit where he was hanging out in his cousin’s video store, playing with the young boys from the neighbourhood. He let them win a few times, then he won too and through it all he was struck by their politeness and courtesy towards him. They were by no means entitled nor spoiled as he described himself as a kid and many other kids with privileged lives of freedom and safety. One boy came back and gave him hot chocolate as a gesture of thanks and welcome. It was touching to hear Chris describe how moved he was by the boys generosity, knowing that he had so little money. It was clear that while the boy might have been poor in material possessions, he was rich in heart and was being true to his Palestinian and Arab roots of being hospitable .

Speaking of being touched, Chris had an honesty and openness of soul that truly spoke to me. It's part of what makes his art so good. Its vibrancy overflows, whether with bold whites and blacks, which I absolutely love, or with strong colors. Yes, a talent comes with practice and dedication, and there is plenty of that in his story, but it also comes with the courage to speak ones truth beautifully and steadfastly. I wish Chris ever ascending heights of success, joy and beautiful companionship of an ever growing community that gets, celebrates and honors his art and his story. Gazaleh is an artist, educator and activist dedicated to promoting cultural, political, and social awareness from a Palestinian-American perspective that is rooted in social justice. Gazaleh uses many mediums to create and spread his art to the world. From murals to illustrations and from graffiti style pieces to clothing designs, Gazaleh’s art is meant to come from all angles. Born in San Francisco and full blooded Palestinian C. Gazaleh is a cross cultural anomaly. Like the poet Mahmoud Darwish said “Ana min huna,  ana min hounak” I am from here, I am from there.

In the Mission District, by the 101 at San Francisco’s upper market area, Chris Gazaleh's mural called “Humanity is Key” tells the story of his homeland: Palestine.  The mural covers three of the four sides of a building in the quiet Elgin Park neighborhood and represents five generations of Palestinian life, and what life “could have been and what things are.”

One of the figures in the mural is a larger than life woman. Chris says, “She’s kind of like a superhero. She’s giant and bigger than the other characters, and a protector of the land,” Gazaleh says. “She has a key in her hands, and is handing the key to kids who are climbing over the wall. In her other hand, she has an orange. In the history of Palestine, on the coast, there were tons of orchards back in the day by Palestinian Christians, Jews, and Muslims, and they all got along. They worked together.” “We foster a network of informed and active individuals who understand the Israeli-Palestinian conflict and the United States’ political, military, and economic role in it.”

"Honestly," says 2014 delegate Anne Champion, "my Eyewitness Palestine delegation changed my perspective on everything." Hundreds of our delegates share similar stories of transformation and inspiration.

This is the essence of Eyewitness Palestine. Every delegation is a unique human journey. Each trip is an experiment in building transnational solidarity based on real human connections. Every experience is real, honest, heartfelt, and genuine. Since 2001, these have been the values that inform our work.

To Chris Gazaleh for the contribution of images from his Instagram

Cafe Alula: An authentic Lebanese neighborhood restaurant
Go back to home
The Exhibit: Oriental Visions from Dreams into Light

3 thoughts on “Chris Gazaleh: Art with a message for social justice”