Some non-profit organizations just buoy the spirit with how their intention and process is so authentic and true to what a non - profit ought to be. It’s my utmost pleasure to introduce the gem Middle East Children’s Association (MECA) and it’s Executive Director, Zeiad Shamrouch. A gem within a gem yet again! As usual, wonderful work is led and blooms at the hands of individuals with amazing humanity.

I was fortunate to meet Zeiad at the time that the organization, MECA ran one of its yearly major events in California, it’s Christmas bazaar. I was delighted that I got to see the bustle and action first hand. During the event, they turned their headquarters into a market where every form of Palestinian handicraft, popular ways to document Palestinian history, and some of its edibles were represented.

First, I walked into a big hall with traditionally embroidered dresses and jackets to the left and T-shirts with all the right messages to the right. And let me tell you I love a T-shirt with a good uplifting message. The MECA headquarters in Berkeley A view from above

Then there was the kitchen corner with some fabulous cookbooks and of course olive oil in different size containers. There were some great cookbooks released in the last decade on Palestinian food that showcase the cultural history and context of dishes and ingredients. I love collecting books on the cuisine of different Arab and Muslim countries and feel particularly proud of this powerful way to preserve the Palestinian identity and culture. Such warmth to the food and related items Pleasure and Joy to behold

Upstairs, there were different rooms, starting with one dedicated to books and posters, to one filled with wooden handicrafts, then another with children’s items, and one more with ceramics and bags. Honestly, I was in heaven and my favorites were the woven wool rugs that I had never seen before, the Velcro calendars for kids, the wooden puzzles of Palestine and the old part of Jerusalem, and the embroidered bags that came in more modernized designs.

So much benefit from the beloved olive tree Hello things for little ones Wood and a map- Be still my heart! What a delightful find these were! Embroidery can beautify so much!

After Zeiad graciously responded to the call of a mutual dear friend who had told him to take care of me, very much in the Arab style of hospitality at its best, he took me on a tour before we sat down for some tea. In a couple of hours, he gave me glimpses of the harsh reality of occupation, mixed with breezes of hope in the form of the work that MECA does.


Zeiad spoke of Gaza, where the Palestinian suffering is at its deepest. Let’s start with water, the source of life for all. Well, it’s not accessible. Zeiad spoke of when he grew up in a camp and his mom, also his hero by the way, would carry water miles on her shoulders every day for the family. He showered once a week. Now, MECA has a program that gives 72,000 children water through a camp school in Gaza. The children get to take the water home to their families. Non-existent or disrupted sewage systems are connected to the problem of water. The struggle goes on and on in primal ways that erode the fabric of every daily life.

Another problem in Gaza is the limited access to electricity. It ranges from 3-4 hours daily in the camps. One effect is that scared children and adults are prevented from going out to use the bathroom at night. Now, how does one begin to measure the abusive experiences that occupation so cruelly creates. Let me tell you, these are only a few of the heartbreaking stories that I have heard across the years. Each and every story carries its own scars and wounds, yet still the families stand strong, bless them. MECA has been so instrumental with helping to alleviate suffering, including the work of a female engineer on their team who has overlooked installing solar panels that store electricity in order for homes to have 10-12 hours of it, instead of the normal 3-4 hours.

Zeiad also spoke of the project, Teach Palestine that works to improve how schools teach about Palestine. They provide accessible background knowledge for teachers on Palestine’s history and current realities, provide model curriculum, lessons plans and resources and create a community for teachers to learn and grow together.

What I learned from Zeiad that day was so powerful and my spirit was cheered by the critical work that this organization does to serve Palestinian children and their families. I am so grateful for having a way to help through MECA. I bought so many gifts for my loved ones back home. By the end of the tour, we had come back full-circle to the bazaar where people could do just that. The bazaar gave crowds the opportunity to do some well timed Christmas shopping while supporting Palestine’s economy. By the way this organization is in the Bay Area in California and will be doing a Ramadan bazaar as well, so do follow up and go if you are in and able to. It was such a pleasure to see the volunteers filling up the place, welcoming, explaining, helping and sharing stories about the items on sale. Some of them drove from as far south as Los Angeles to join in the good work. A volunteer in traditional dress telling the stories

Zeiad told me that the MECA staff consists of three women in Palestine, an engineer, a nutritionist and a doctor. Each of them personally checks the credibility of the cooperatives that they source items from to ensure they demonstrate fair treatment to women. Only then will they stock their items to sell at the bazaars and the online shop. It’s so heartening to see good intention and process at every touch-point of MECA’s work. As a final note, Zeiad expanded my heart even further and gave it wings by saying : “This is not charity this is solidarity with Palestinians.” And that is a most beautiful and hopeful note to end this post with. From the last standing Kufiya factory Posters of those who speak up for Palestine First pieces from a new center in Balata camp You`ve got to love the new practical designs 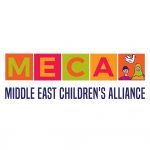 Shop for a cause, shop Palestine.