Making the leap of talent and passion- A Palestinian Restaurant

Making the leap of talent and passion- A Palestinian Restaurant

This post is dear to my heart for many reasons. Firstly, because it is a proactive example of what the Bint Battuta blog is about - honoring, preserving and evolving Arab and Muslim culture. Secondly, because it demonstrates a talented and courageous individual who jumps right into a task without training, but with the highest level of commitment to doing work with excellence. Thirdly because it is about Palestine, carrying the richness and beauty of it and its culture to those who can’t go there. And, lastly, because the brave and talented Palestinian woman behind the post is one of the dearest people on earth to me, Azza Al Sajdi.

I was there by her side right from the beginning when her friend, Rola asked her to design a Palestinian restaurant that she wanted to open in the area of JBR, in Dubai. At the time, Azza was taking a rest from her very successful career in marketing in the corporate world, all of her friends know and love her sense of beauty, culture and deep understanding of Palestinian identity. So it came as no surprise when I heard that Azza had been offered this project and had accepted it.

For the next year, Azza undertook intense research into the process of bringing the restaurant to life. She also made a trip to Jordan and Palestine to source the materials and pieces as authentically as possible and some items were designed by her and executed by craftsmen that she found and collaborated with. She deeply wanted to present Palestine through the culinary world in a modern and warm way that fully reflected its charm. And, this is precisely what she did, through the creation of the restaurant, Simsim. 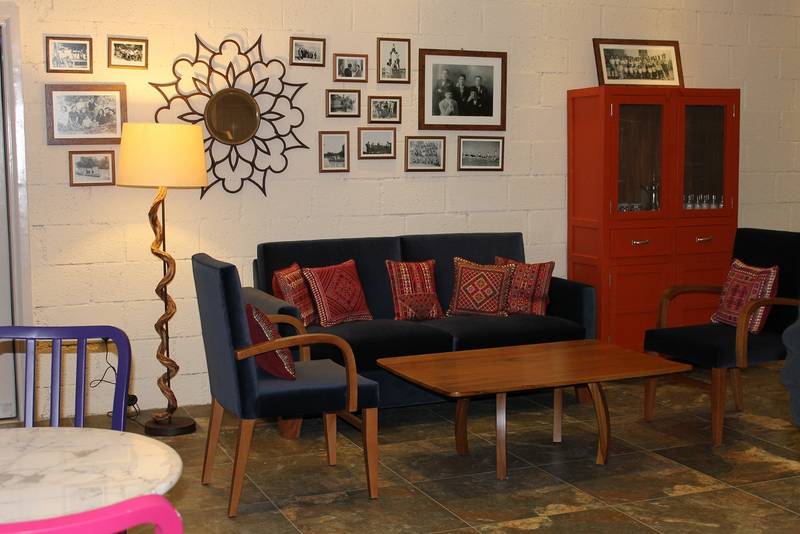 You come into a Palestinian sitting room 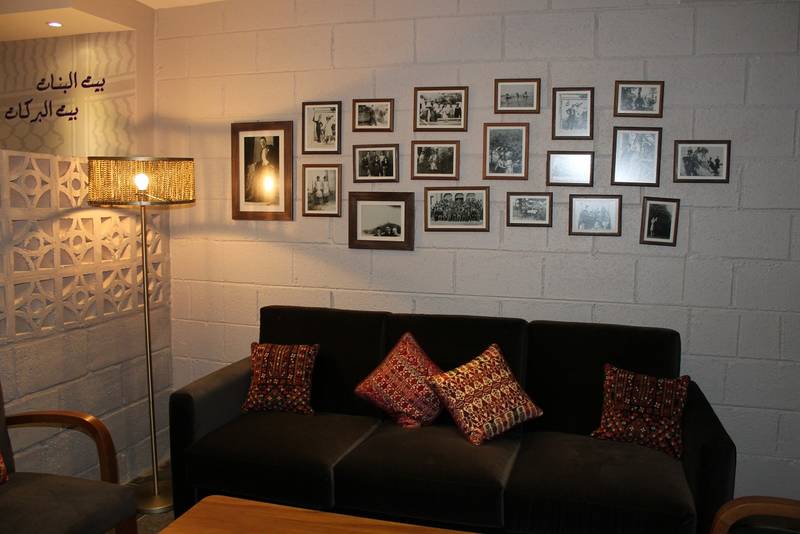 The old photos are authentic ones 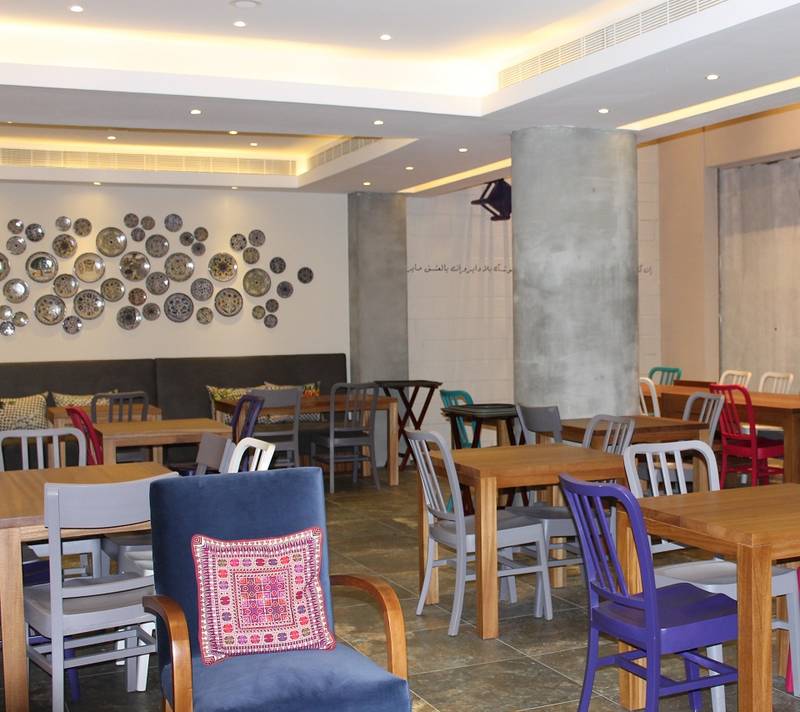 Embroidered pillows a staple in a Palestinian home 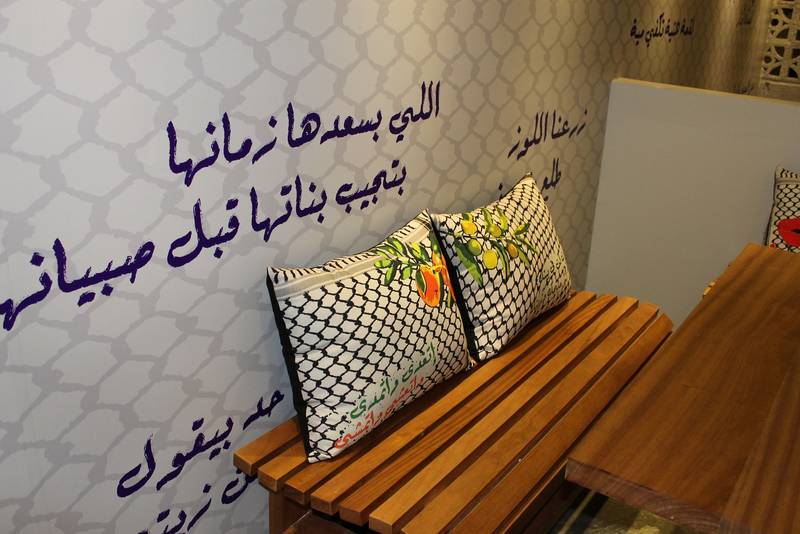 What stands out in my mind from the flurry of comings and goings and excited explanations and updates, was how she made over 20 trips to the supplier to decide on the colors of the chairs she had chosen. We were part of the panel of consultants by which shades and tints were chosen. This small example of her incredible meticulousness and attention to detail gives you an idea of Azza’s sense of itqan and excellence that permeated the whole project. 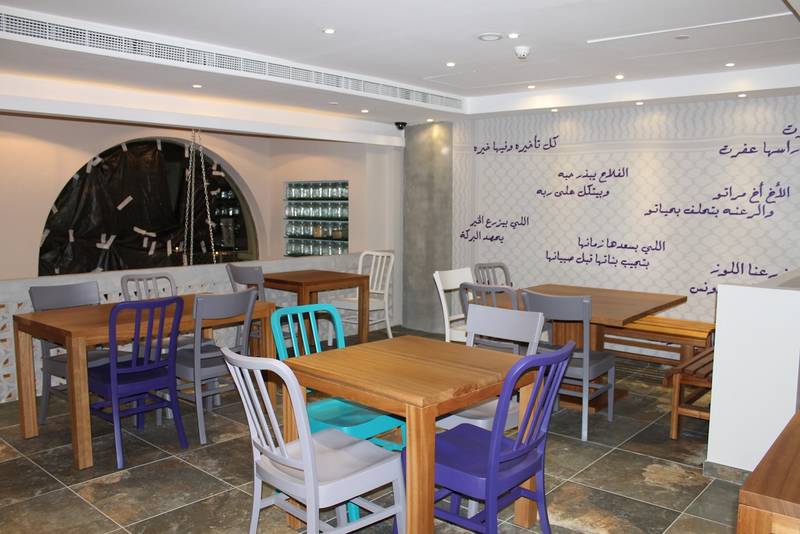 Navy chairs from the 40s in modern colors 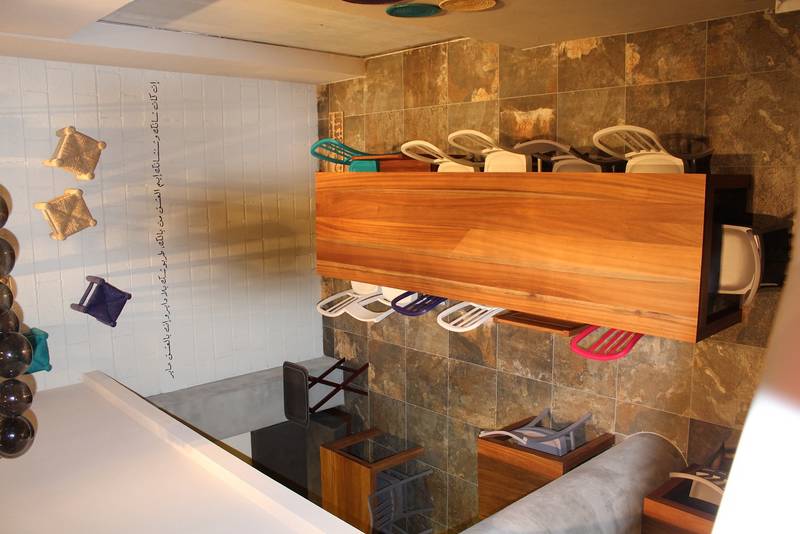 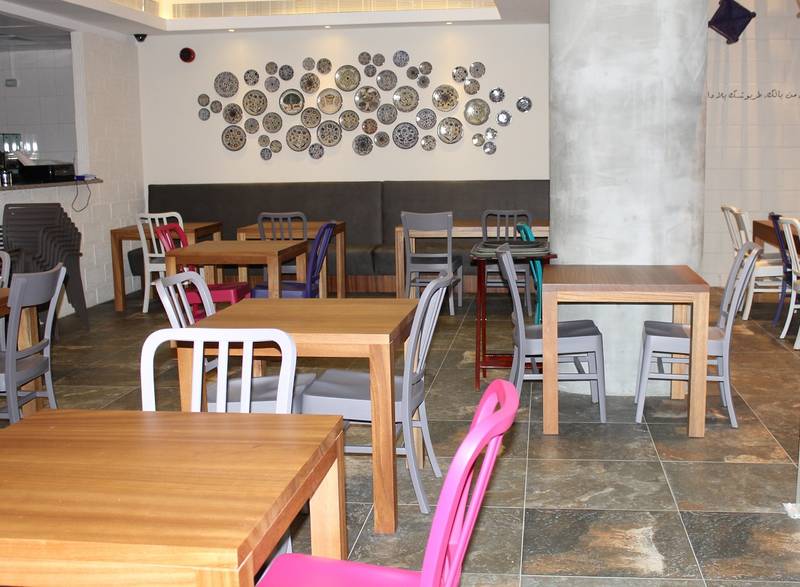 A far view of the ceramics 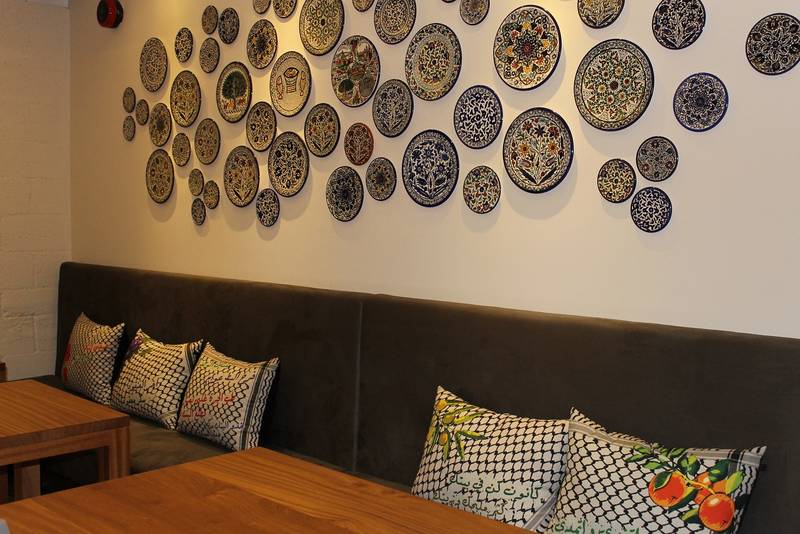 Two sad things happened that I would like to share. The first was that Azza had designed the floor of the restaurant to showcase Palestinian embroidery,  however, as it turned out, it was not possible due to complications with the executing team. As beautiful and creative as the restaurant eventually turned out to be, the plans she had for that flooring would have pulled everything together and made it a seamlessly stunning Palestinian space. The second was that due to a combination of location and size, the restaurant couldn’t stay open. Who really knows why somethings succeed and others don’t when both are equally charming and well done. That is the all-knowing and wise hand of God. Sad as I am that Simsim isn’t there to enjoy and eat from, I am forever touched by the deep knowledge and love for Palestinian culture and creative flair that went into it. 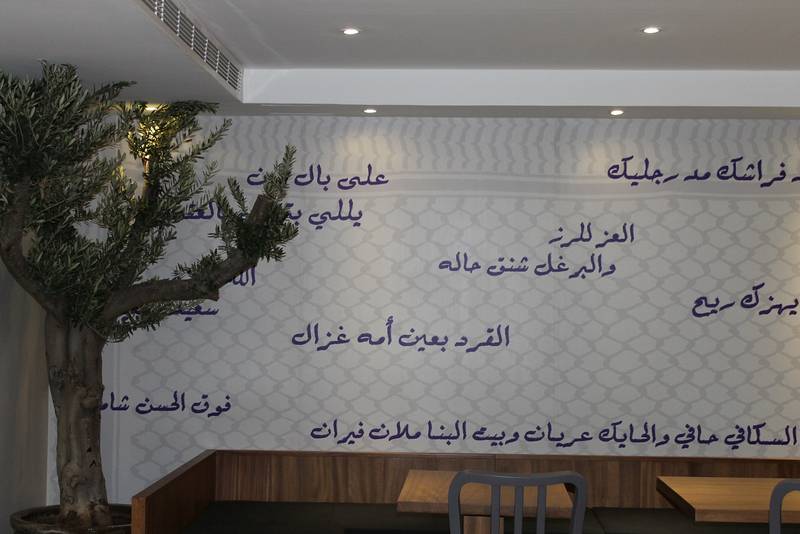 The olive tree as a symbol of the land 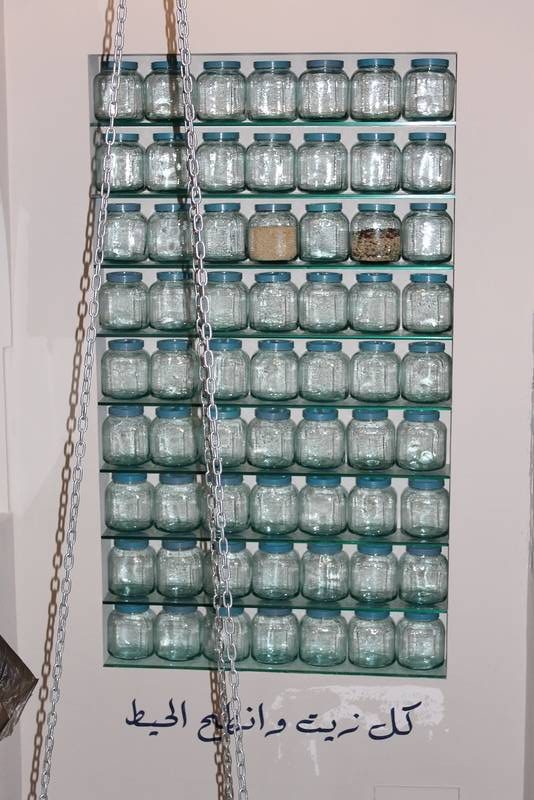 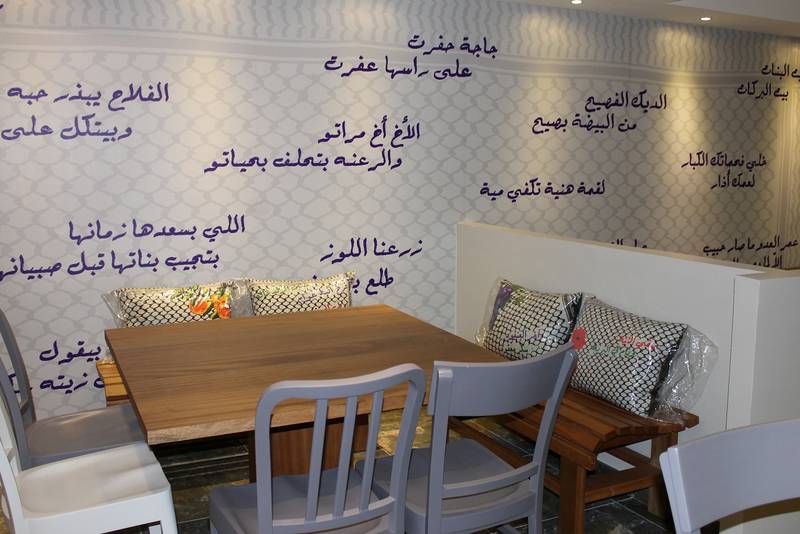 I recorded an interview with Azza, assisted by a filmmaker to capture the essence of what she did while it was still fresh in her mind and to capture this beautiful achievement, fleeting as the restaurant was to honor my friend. I also thought that her courage in pursuing her talent and passion and commitment to excellence was inspirational for youth at a time where I was exploring how to help youth find their calling and themselves. 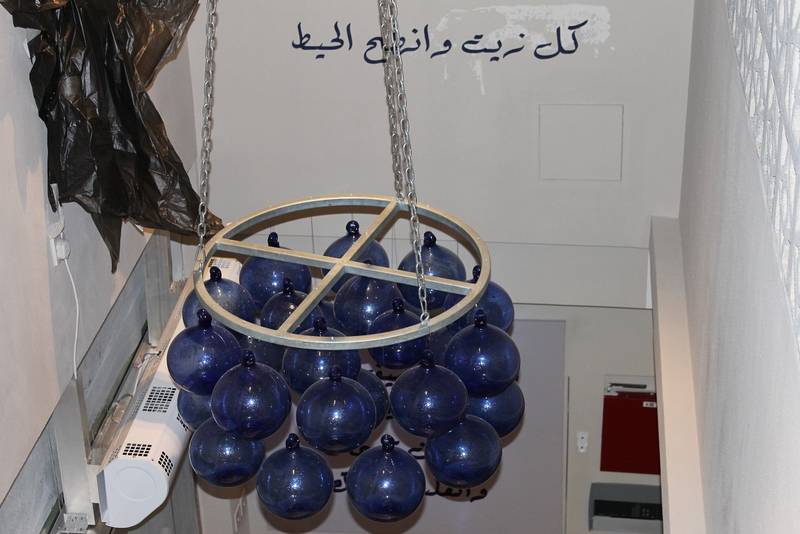 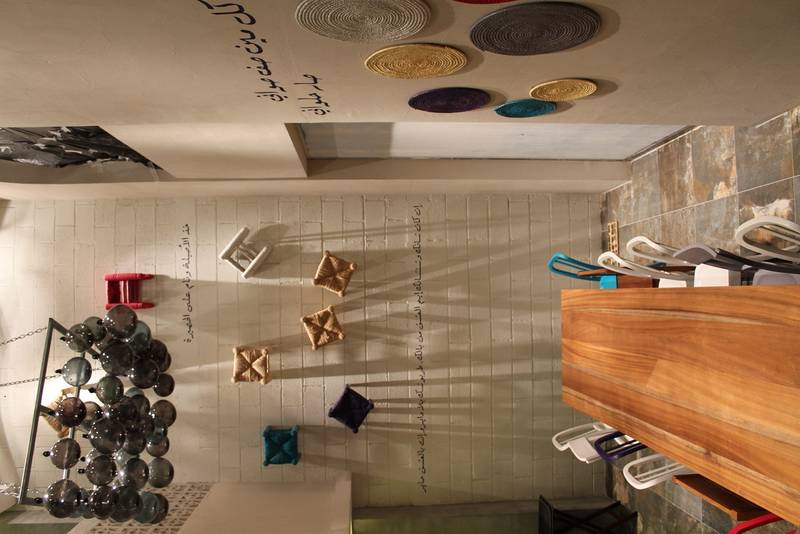 Then there was the Raffia chairs 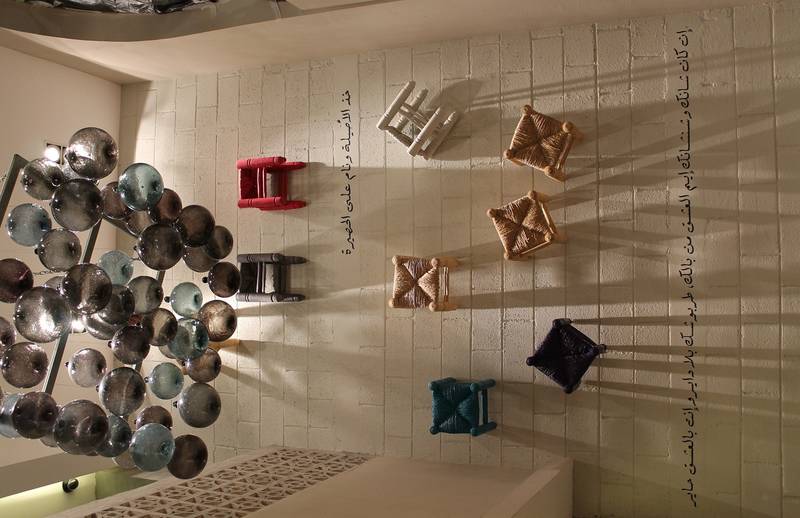 But inspired by glasswork in Hebron 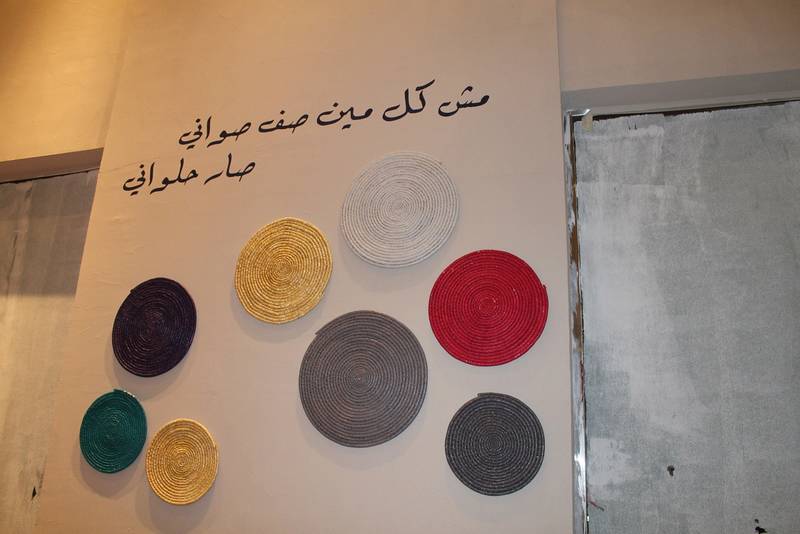 And trays dipped in fun colors 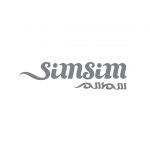 To Azza for the contribution of images

Interview – Azza Al Sajdi
Go back to home
HEAVEN, EARTH & The 10,000 THINGS, MOMENTS IN THE LIVES OF MUSLIMS OF CHINA, PETER SANDERS