Islam in Vietnam- An introduction to its history and culture Islam in Vietnam- An introduction to its history and culture

When I arrived in Vietnam I wasn’t sure if I would be able to connect with the Muslims there and have access to their history and culture, as I had no contacts and they were such a minority. However, with God’s Grace, I stumbled upon its presence by accident, in the South of Vietnam with an impromptu visit to Ho Chi Minh City, that was not originally in my plan.

I had not originally intended to go to Ho Chi Minh City, also known as Saigon its name before the unification of Vietnam under the communist leader Ho Chi Minh, because my close globetrotter friend had told me that it did not hold the same charm as the rest of Vietnam. However, my dear friend whom I was meeting up with in Vietnam had to go to Ho Chi Minh to attend a conference and since we didn't have much time together, I opted to go with her.  She took me to the main mosque, Jamia Al Muslimin and I was so charmed by its simplicity, architecture and its unusual detailing in areas like the windows and doors. It turned out to be influenced by Malaysian architecture and craftsmanship due to the funding and close ties for learning that exist between the two countries. I was delighted with this new style as I had not been exposed to it before. 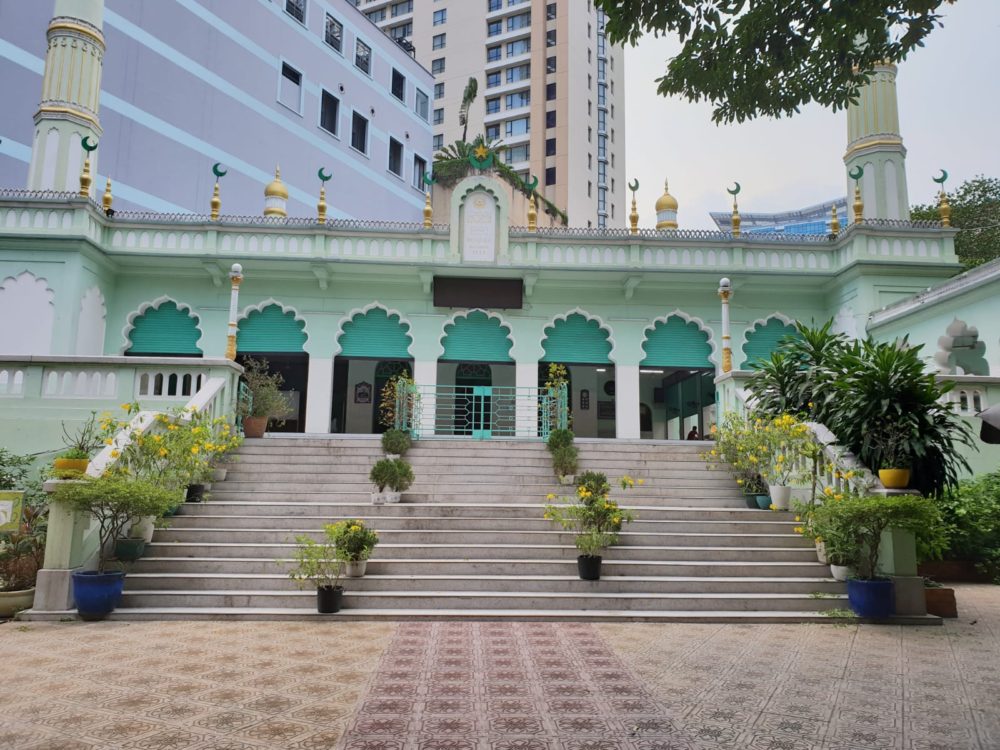 Love the soft colors and plants at first glance 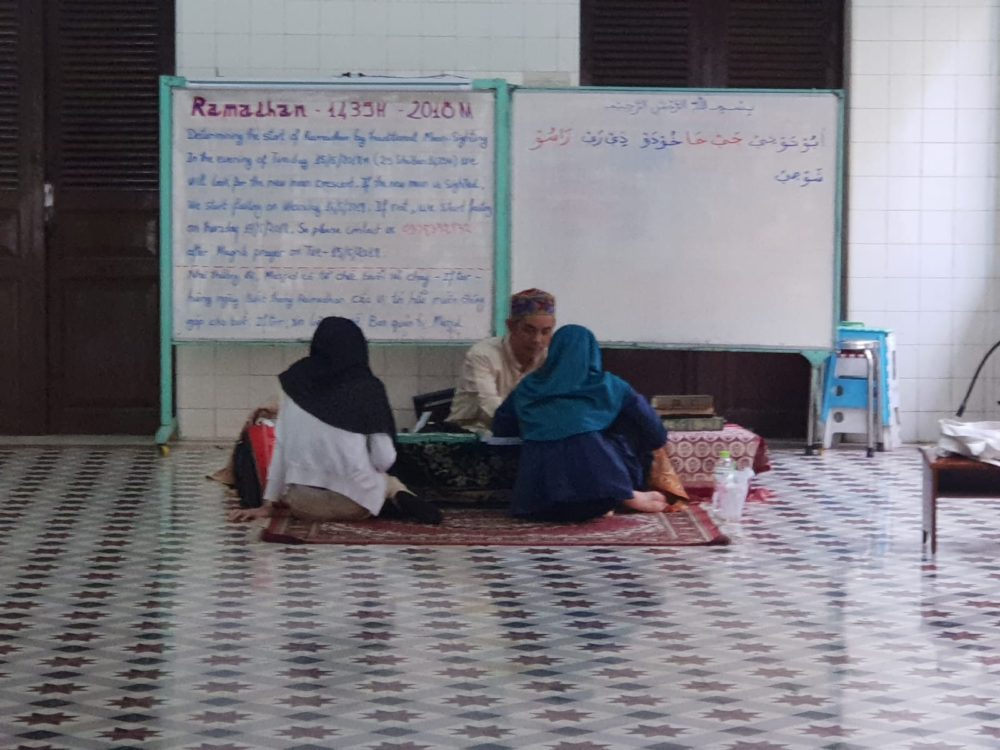 Lovely sight of a lesson for girls 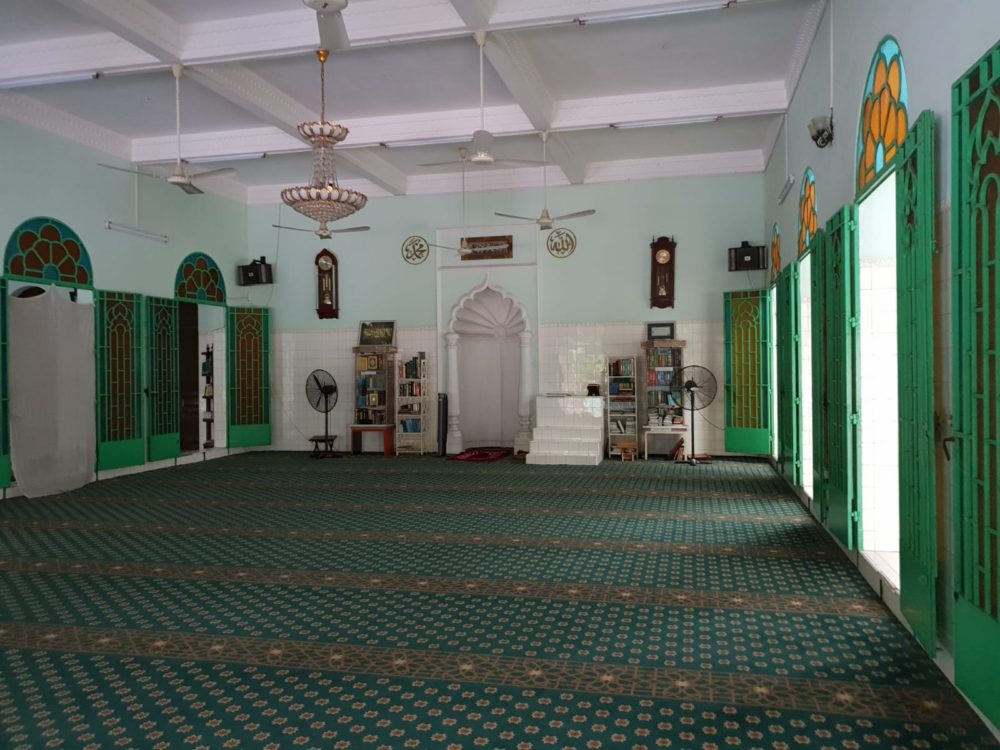 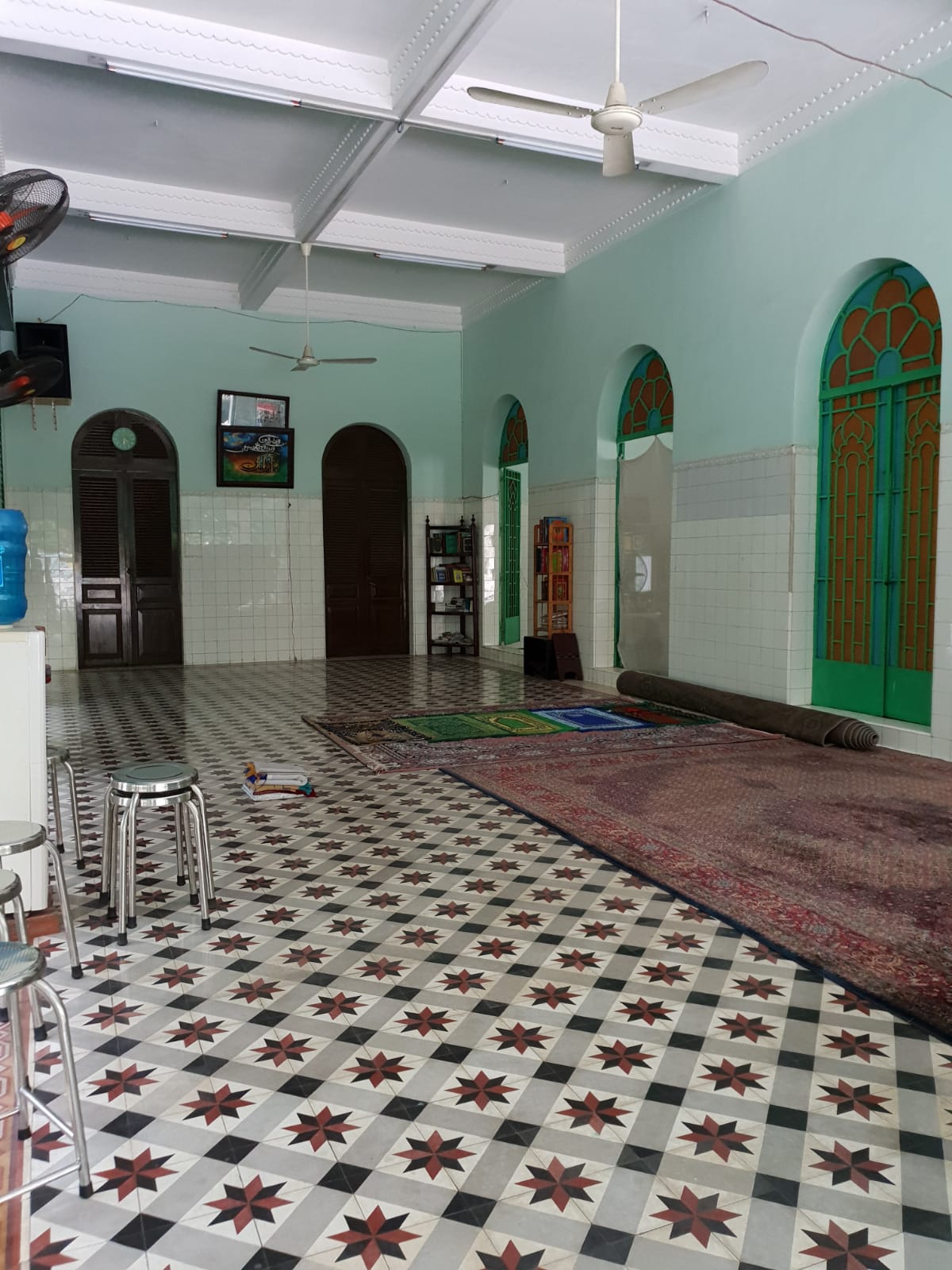 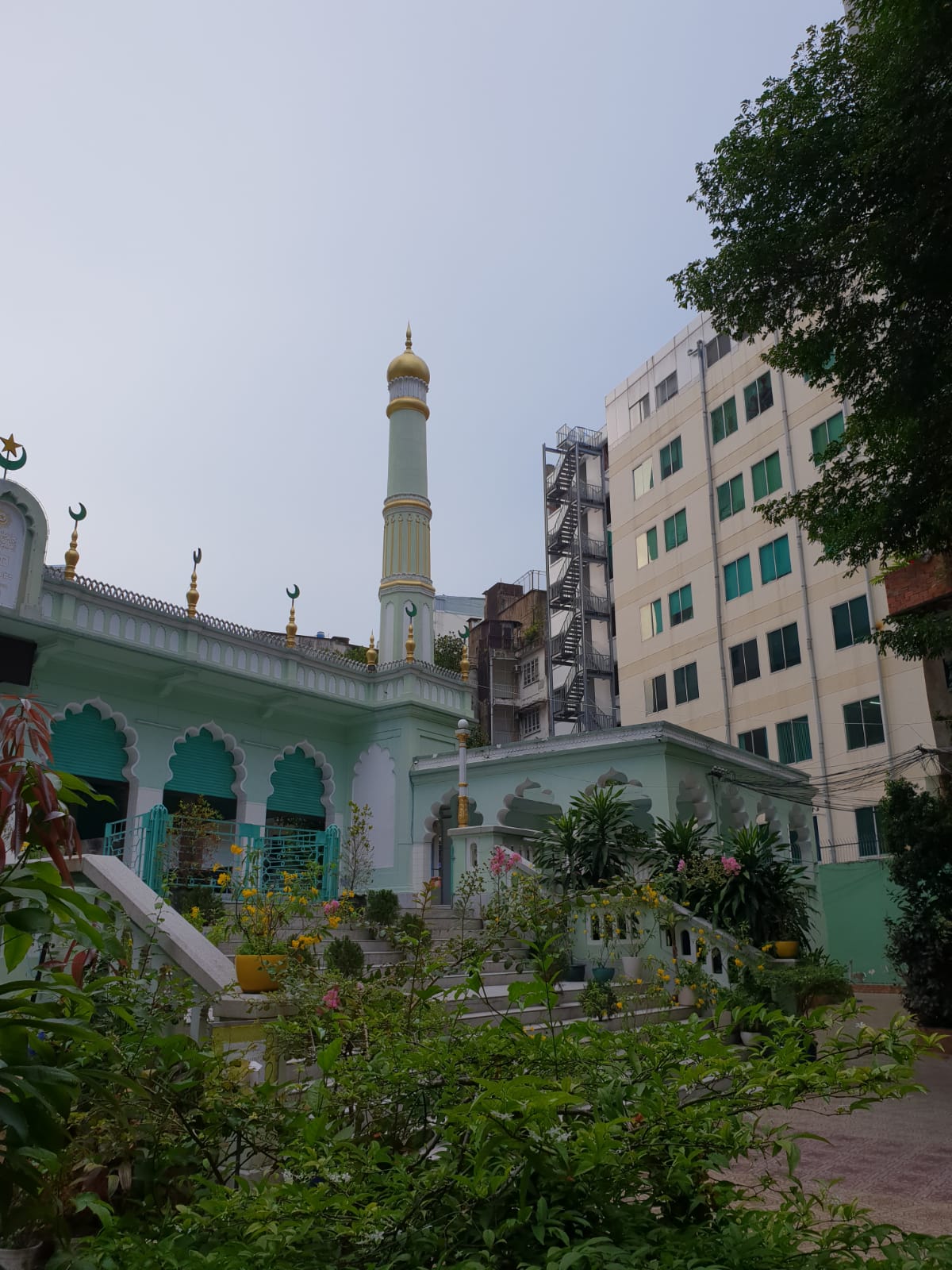 After we prayed at the mosque and I took photos, we walked over to the Halal restaurant my friend was so excited about having halal pho. The place was warm and welcoming and it was so much fun to take from the different small dishes following the explanation the gracious waiter gave us on how to prepare our pho dish. 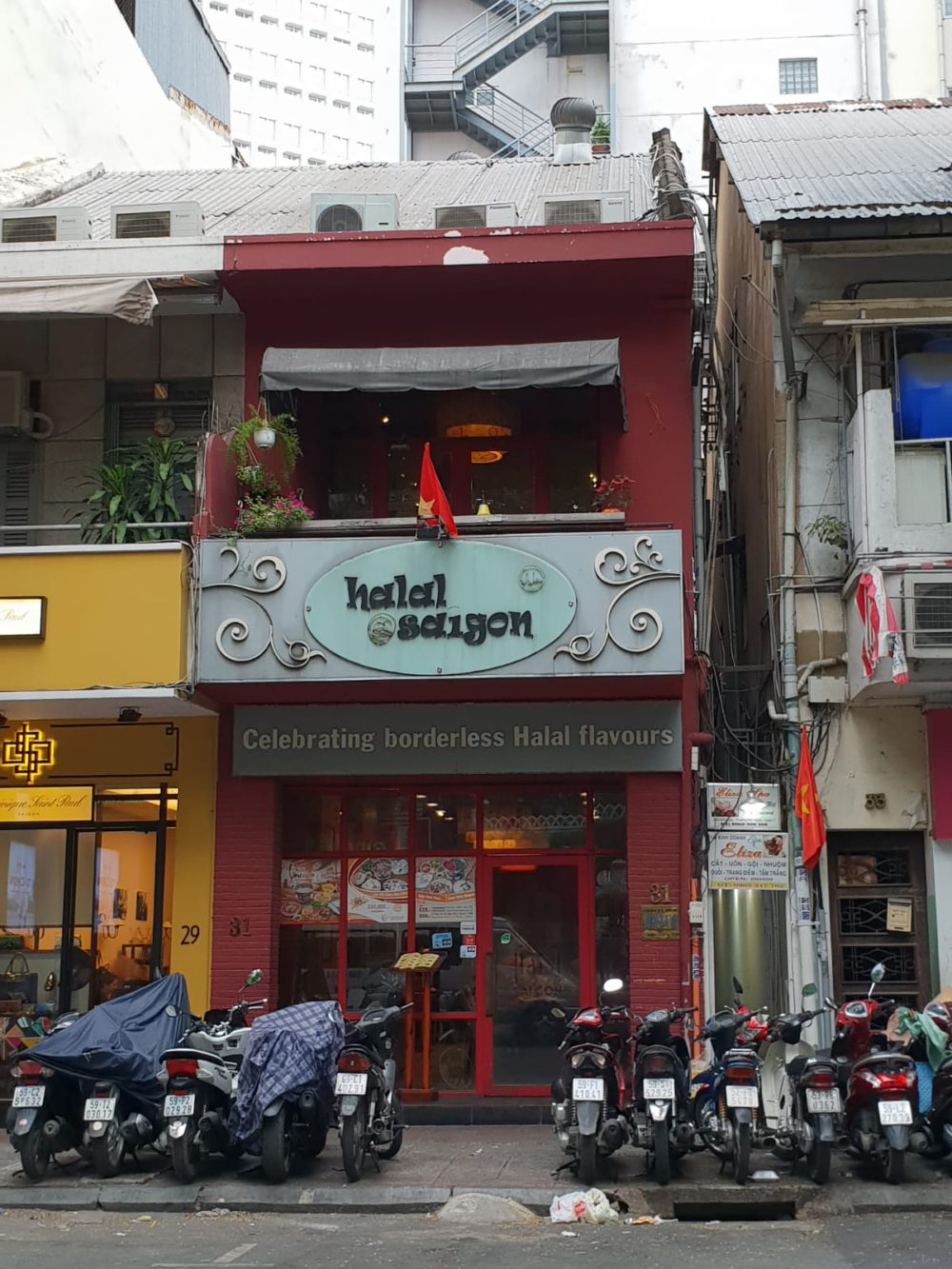 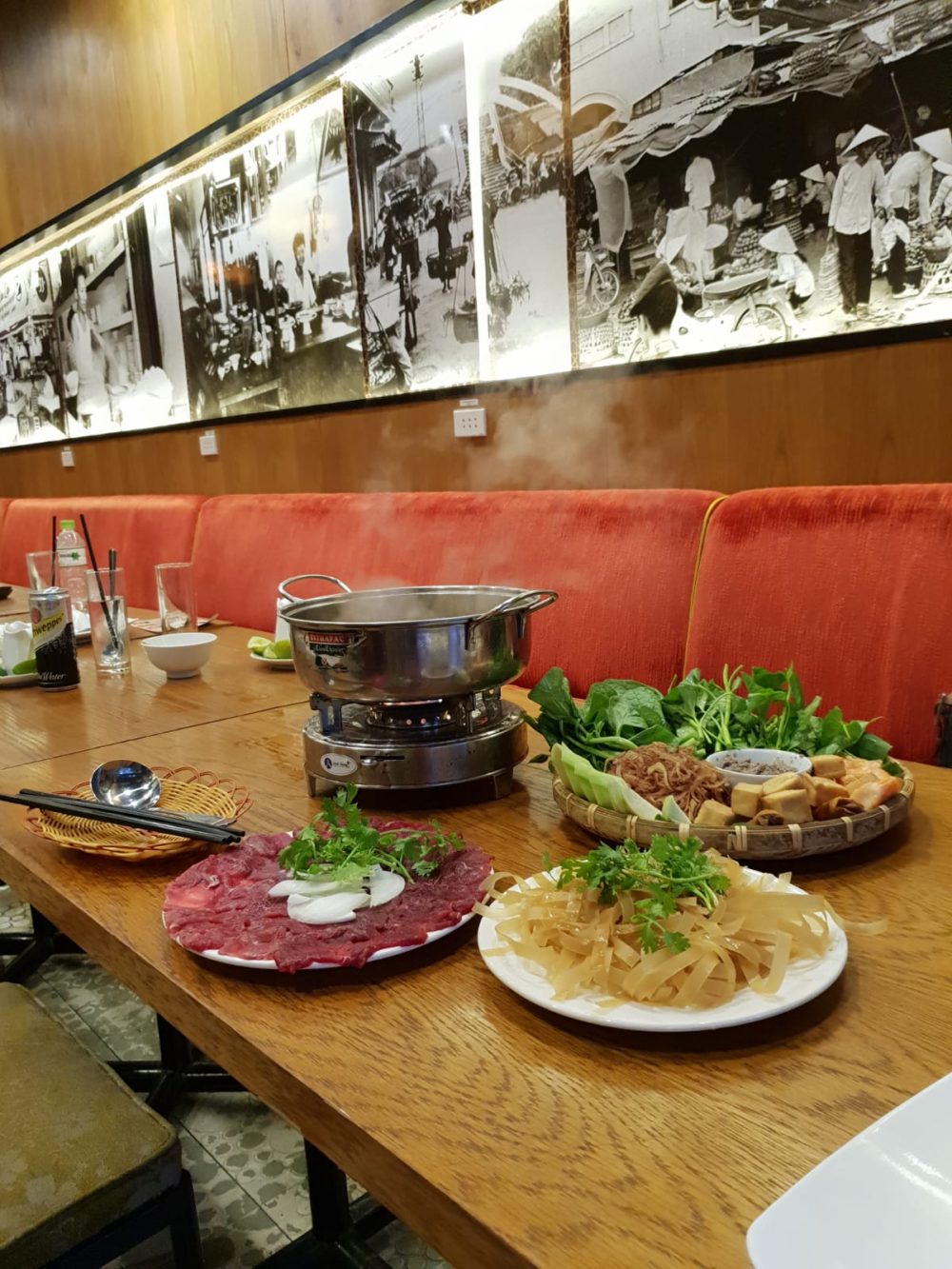 The feast of small dishes

Then off we went to a hijab shop that my friend has discovered through a muslim Malaysian friend she had made at the conference. The shop was an endless array of hijabs from patterns to solids with different textures and colors covering the many models of hijab that exist today. I made some choices and after returning to Dubai, realized that the quality of the stretchy Malaysian hijabs were better than the ones available in the UAE. Next time, or when I go to Malaysia I know what to look for! 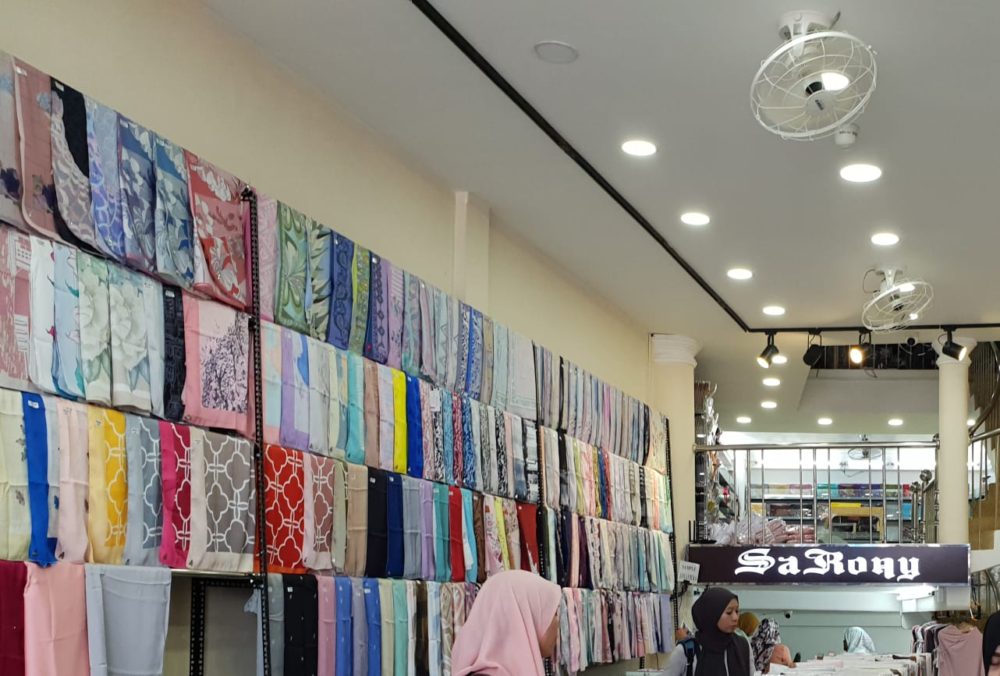 One row after another 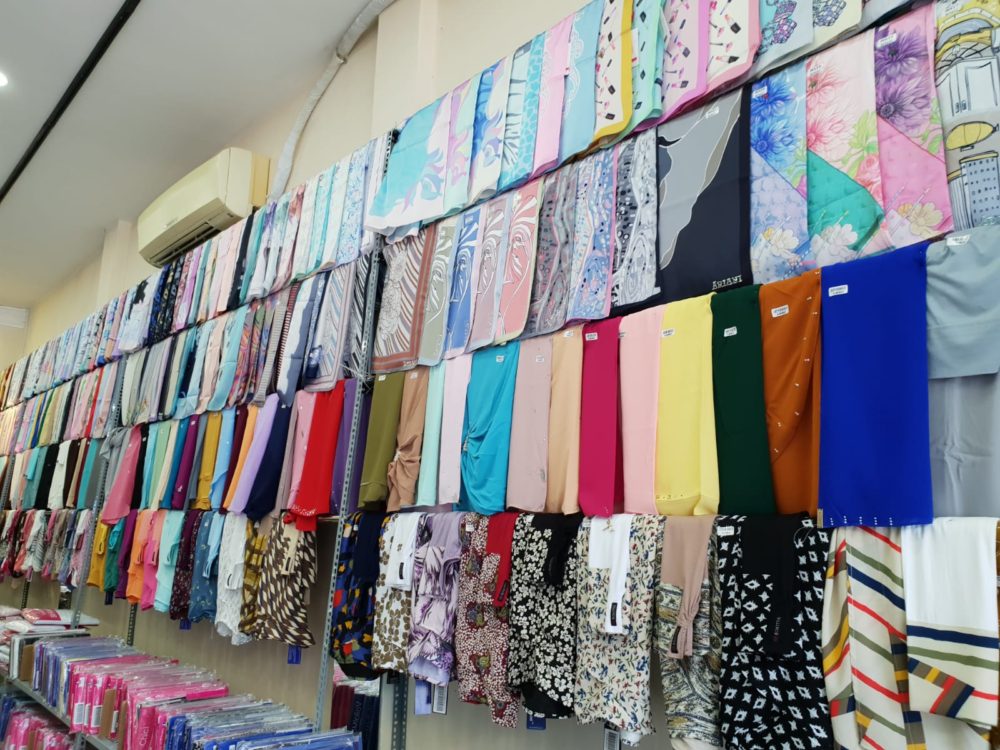 As we were walking out of the shop, an advert for a tour company called, Bismillah Tours caught my eye and as I was staying for an extra day after my friend left, I decided to ask the lady for a private tour. I stressed to her that I wanted a guide who knew a lot about the history and culture of Vietnam because I specialised in the field of education. She assured me that the guide would be knowledgeable. 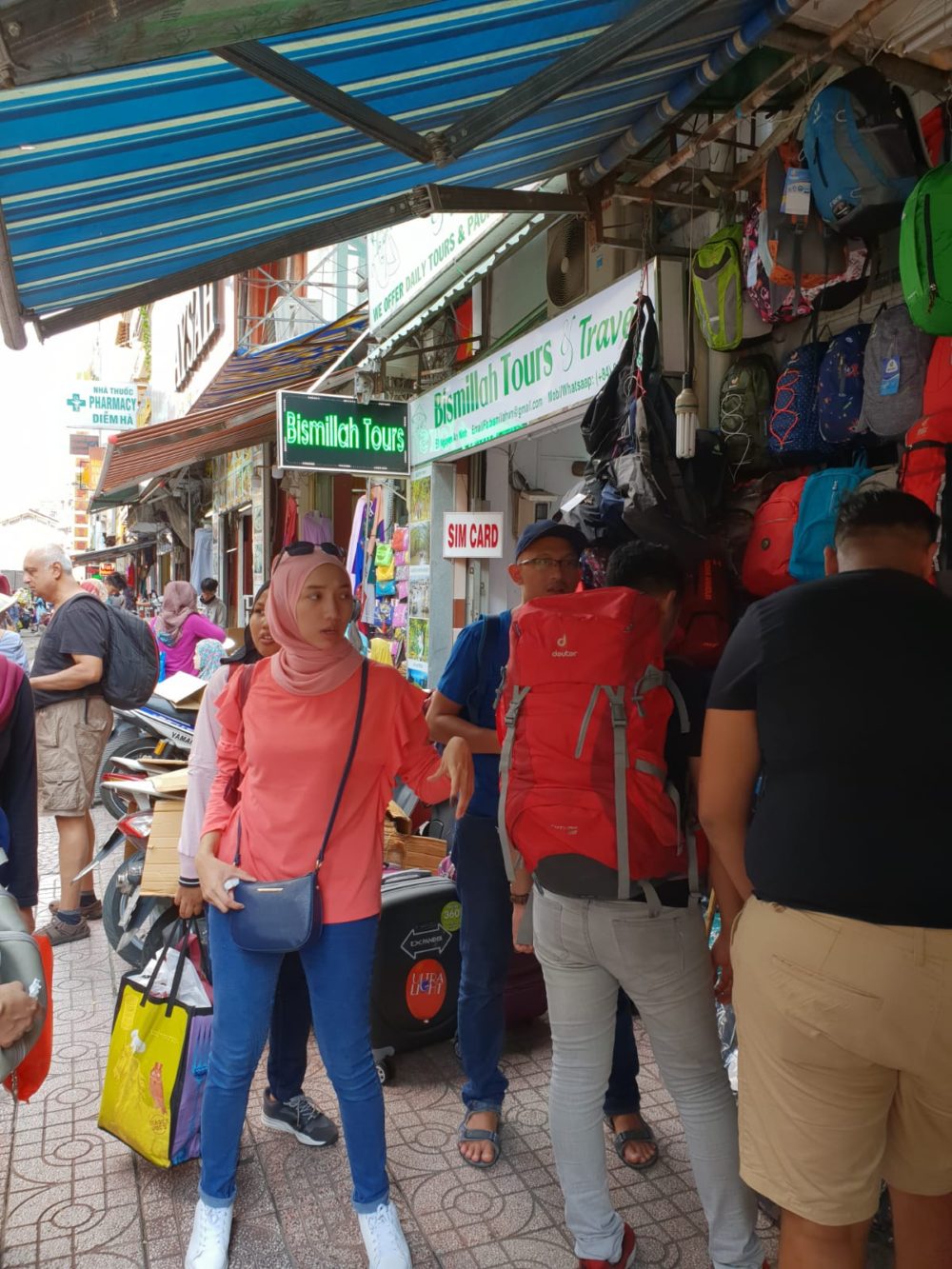 When its meant to be!

The next day, when my guide Moon arrived I asked him if he was Muslim and he said that he was Buddhist!! That tipped me right away that my request was not really understood or provided, lol. However, I decided that since we were already in front of each other, after my best attempt given the circumstances, that God meant for Moon and I to meet. He was a very genial, respectful, and astute gentleman who was an expert in the fascinating and jagged timeline of Vietnam and although I greatly enjoyed his insights, at the end of our talk with still two hours left to our already paid for tour, I explained to him gently that I was disappointed not to have received the immersion in Vietnam’s Islamic culture that I was promised. I knew deep down inside that my request was not an easy one to meet as most Muslim tourists go to Vietnam for the cheap shopping, and halal food or to visit its main mosques, rather than it’s history, but I just wanted to try my luck, as they say. However, the Vietnamese have a fascinating understanding of the subtle signs of contentment and its opposing emotions, and true to that impressive ability, Moon was also determined not to let me leave unhappy.

Clever Moon provided the perfect solution to our present dilemma as he suggested that we go to the mosque and talk to whoever was there and he would translate for me. We looked at the map and I decided which mosques we would visit and we headed off. We went to two mosques in the remaining time of our tour. In the first, Jamiul Islamiyah, we spoke to the amiable, hard working sister who had set up a cart right next to the mosque in order to sell food and had a simple station to cook eggs. She was also rolling spring rolls as we spoke, for her cousin’s halal restaurant in order to make an extra income. We had such an insightful conversation and I came away from it deeply touched. 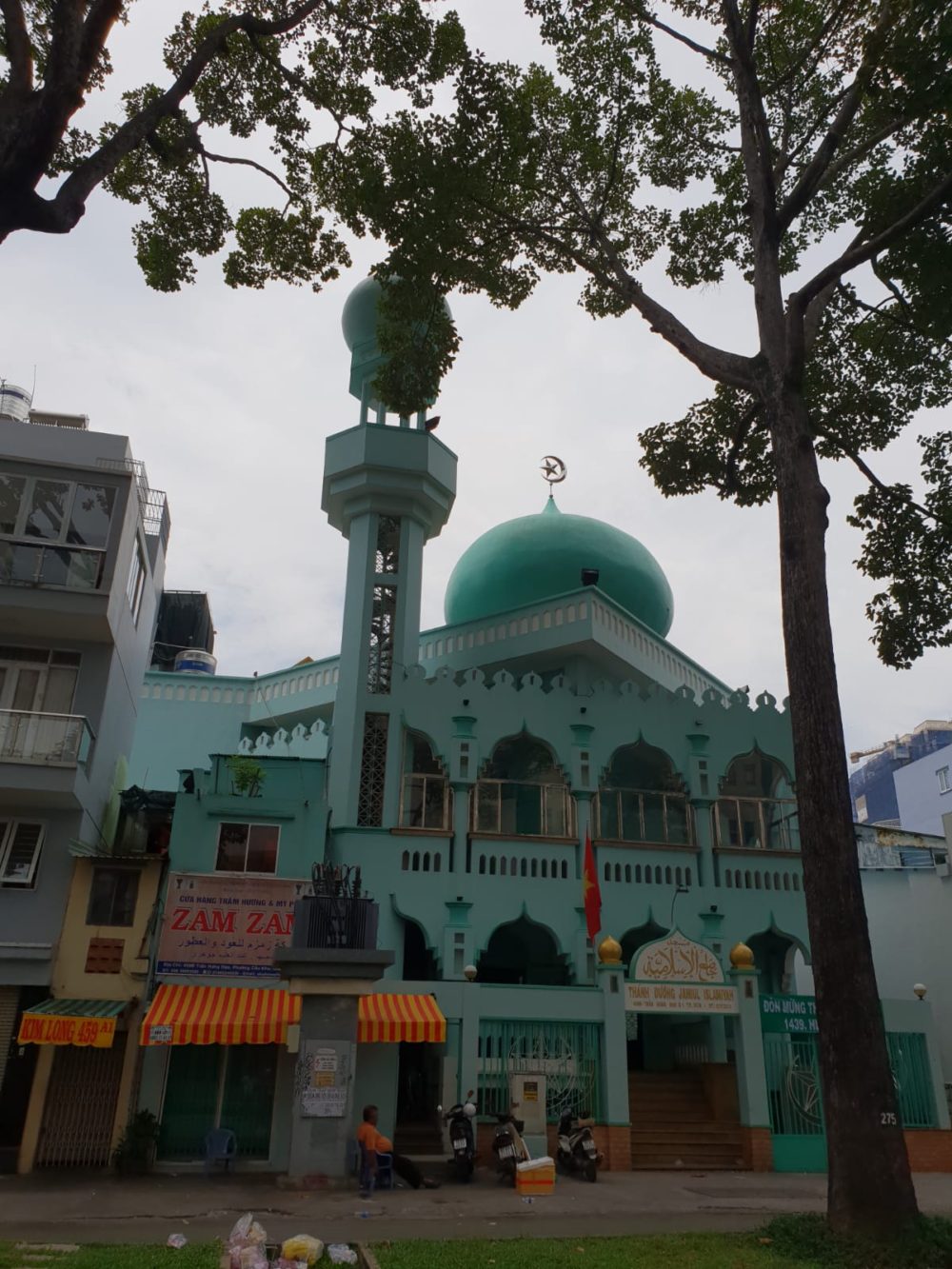 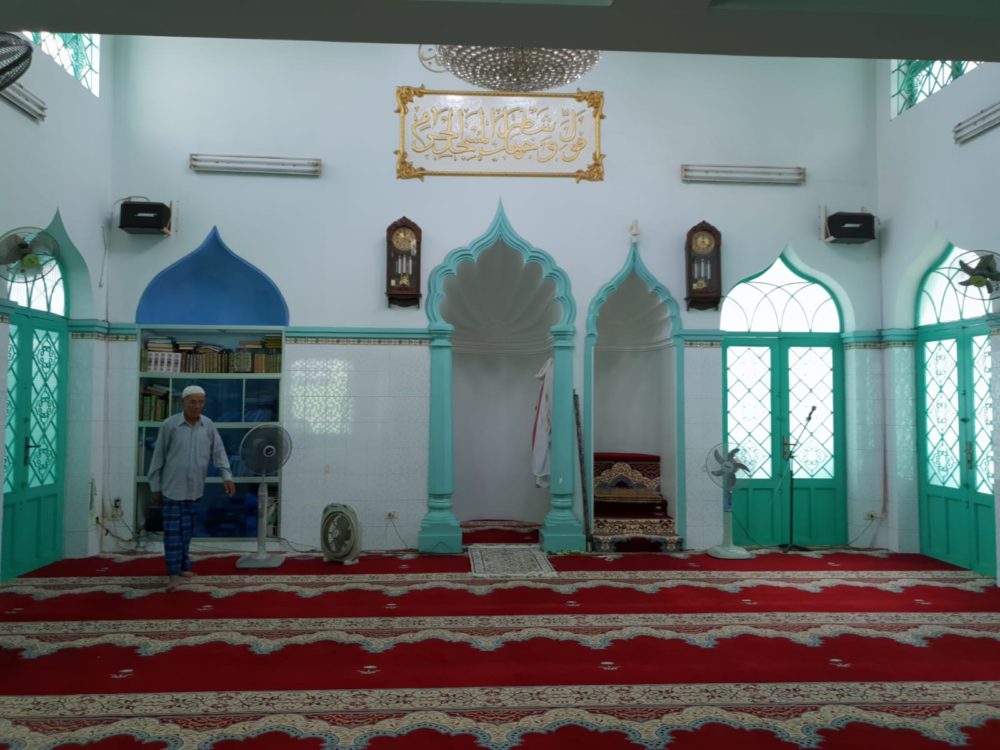 And on the inside

Behind the mosque, we discovered a community living in simple houses. They used the mosque itself as a place of gathering, true to the name Jami’, literally meaning gatherer, that is given to the mosques where Juma’ah prayer is held on fridays as well as the Eid prayers. They told us how they couldn’t afford to celebrate both religious and social gatherings individually, so they would take every opportunity, whether it be Eid, a marriage or a birth of a child to cook, eat and honor the occasion together. Classes were also offered at the mosque to learn about the basic practices and history of islam and both were free for children and adults. But, for one hundred dollars a month, the teacher would go to the home for a private or group lesson there. 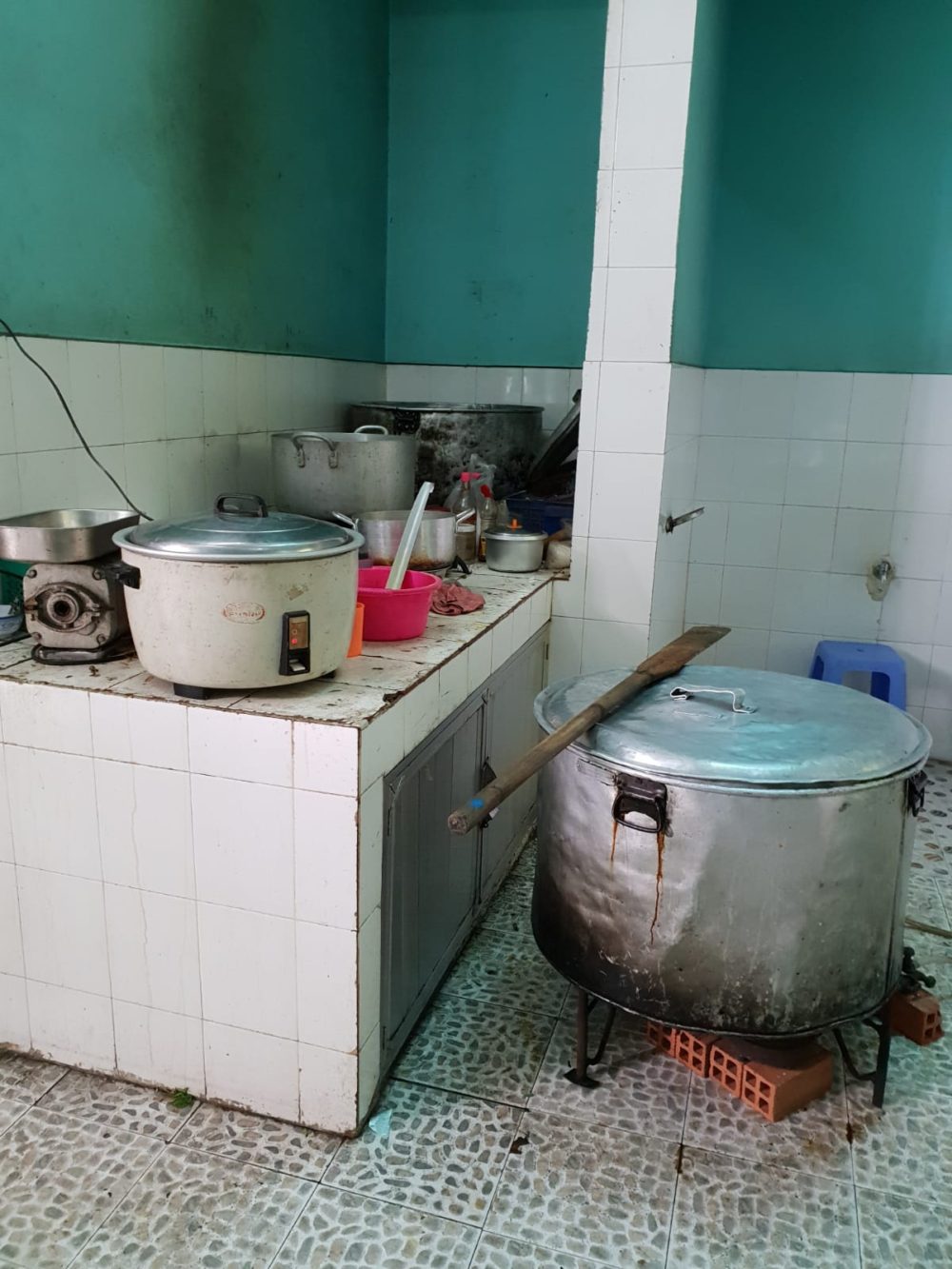 The kitchen of the mosque 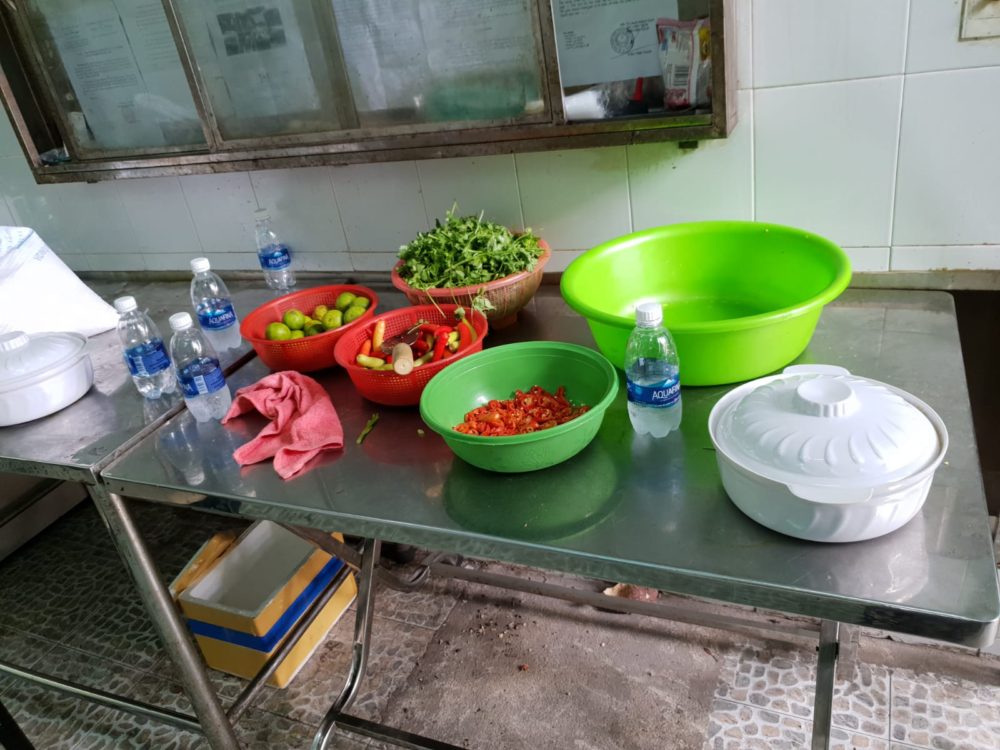 Speaking to a sister in the community, she spoke of the sisters and brothers going to Hajj and how excited everybody would be to welcome them back and hear their stories, as well as receive the prayer beads, mats, clothes and perfume oils they would bring with them. She also wistfully spoke of the time when she could go, but for now she needed to work and make money for her children. She was born in the community in Ho Chi Minh, but then had gotten married and moved to a city by the Mekong river where the majority of Muslims live in modern day Vietnam, other than in Ho Chi Minh. She had returned to Ho Chi Minh after getting a divorce and was embraced with her children by the community.

While we were talking, a little girl came by and the sister had her come and say hello to me. She was such a chubby cute little girl but shy and reserved. She came over anyway and held my two hands in her own which was such a gesture of care. I was so touched. Then the lady, again showing the Vietnamese astuteness to reading emotions, noticed how delighted I was by the little girl’s welcome. She brought another girl to me, who was feisty, bubbly and very open, practically spilling herself out of the sister’s arms to take my hand in her two little hands. That was the best handshake I have ever experienced. It was like a warm enthusiastic hug to the heart. 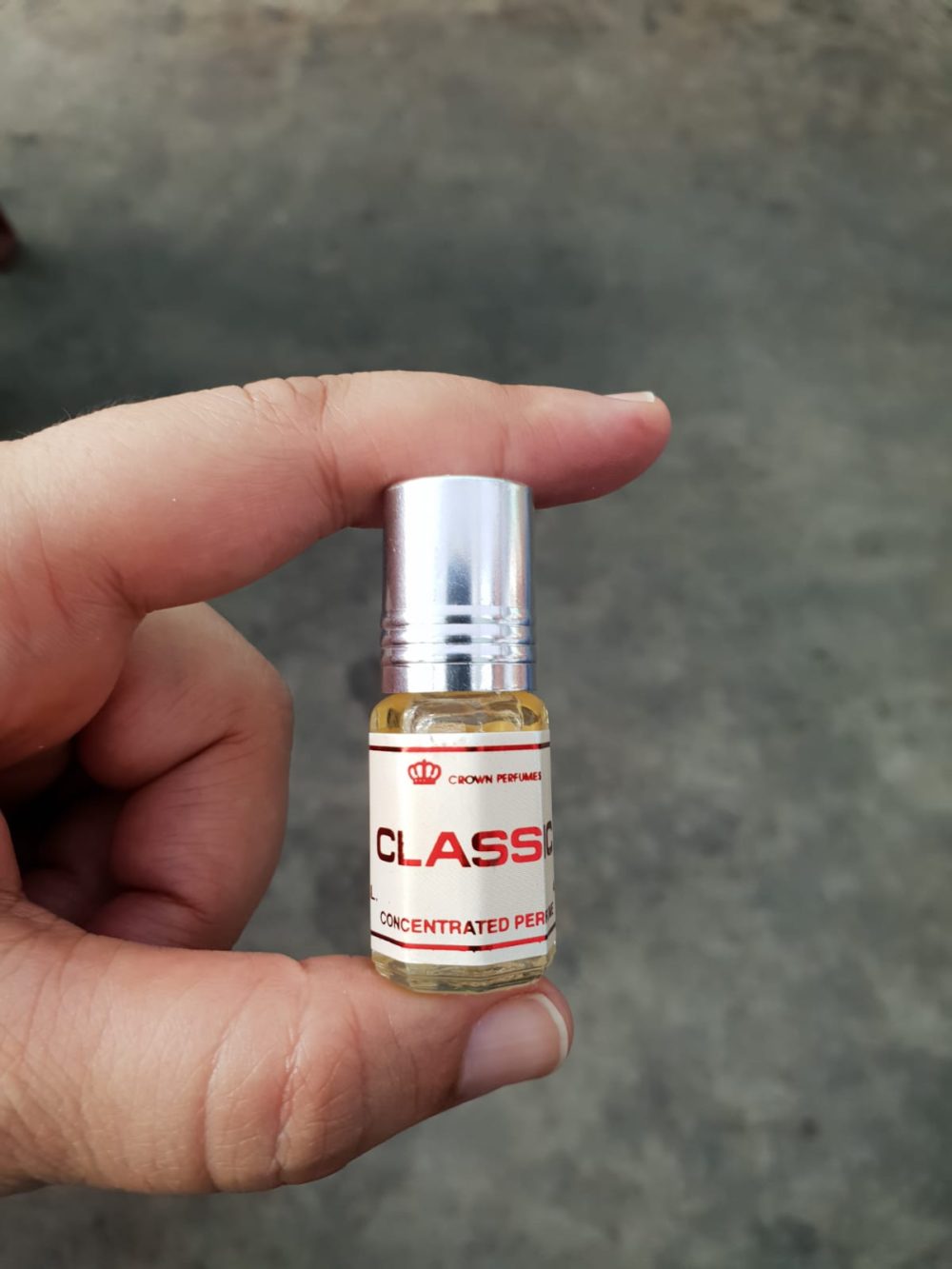 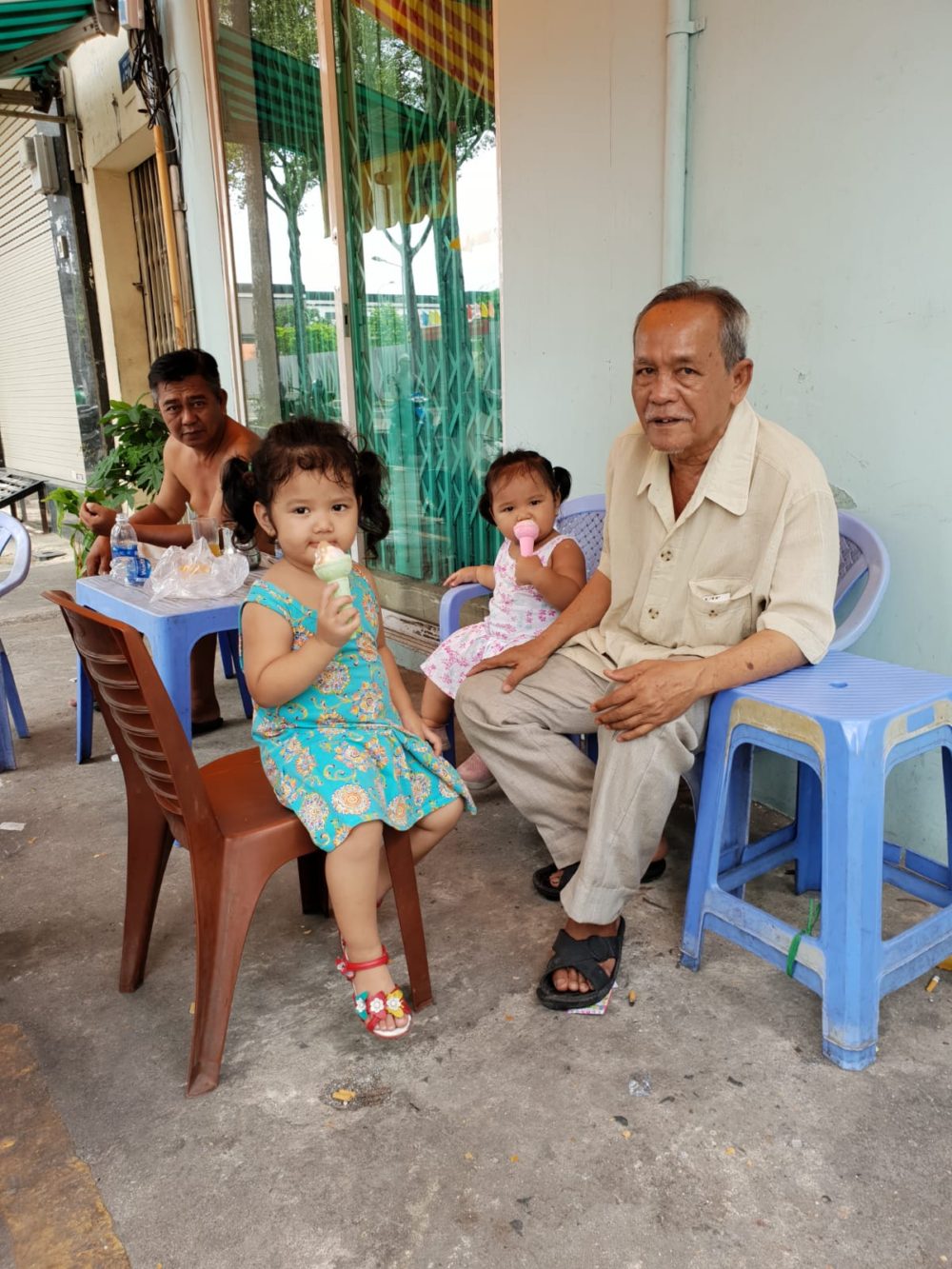 The two little girls who shook my hand

After, we visited a second mosque, Cho lon Mosque, that was bigger than the first one. It was prayer time so we prayed, spoke with the imam for a bit and then left. That mosque and its community looked better off than the first one we visited, if still simple. 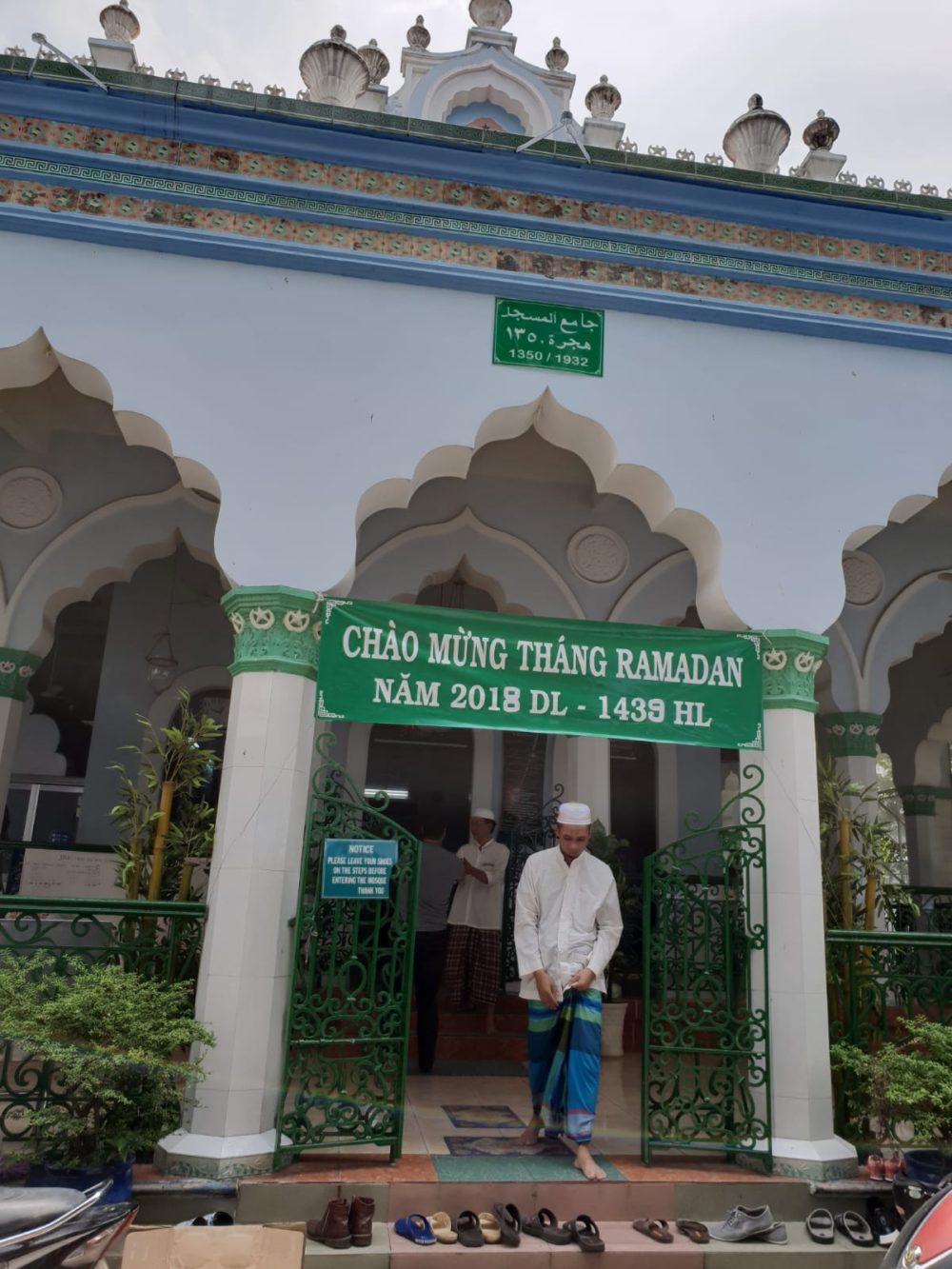 Coming out after Salah 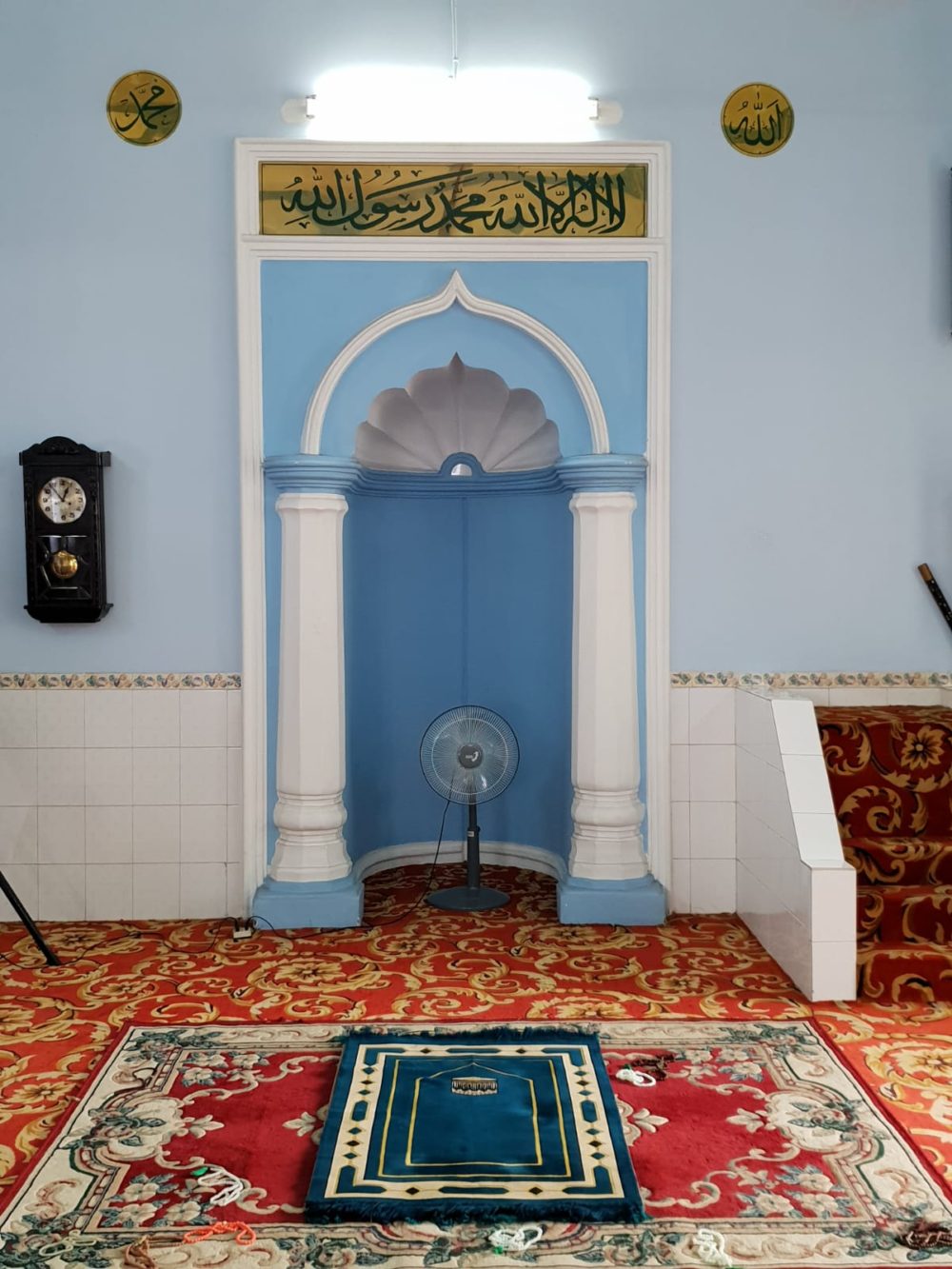 The direction of the Qiblah

I think this little unexpected strategy of how to gain a better understanding of Islam in a foreign land with a language I didn't understand and a history I knew so very little about, has opened up my horizons. I look forward to the next time I intentionally go out with a guide as my translator and enjoy the same grass-roots introduction that Moon, Bless him,  gave me with his crafty, insightful solution. Imagine if I had right off the bat complained about Moon and refused to partake in the tour! When you travel off the beaten track, but with a clear intention to learn and grow, God will show you the way in the most delightful and unexpected tailor made ways.

Alongside Moon’s ingenious strategy, I had stumbled myself upon another promising strategy to find out, if Islam had a history in the country and its story. I was looking at the list of possible places that would offer a glimpse into Islam in Vietnam on the first day I arrived in Vietnam, in Hanoi and the ethnography museum caught my eye. I thought to myself, that if anywhere would have the information I was looking for, this would be it, and I was right! Of the 54 ethnicities in Vietnam, the Cham people were the ones who first got exposed to Islam somewhere at the end of the 10th century and then the king of the Champa kingdom had become muslim in the 17th century, which of course facilitated the conversion of  many of his people. I was so delighted to see the details and walk through that very charming rendition of the colorful groups that make up Vietnam, between crafts, clothes and music oh my. I think my love of ethnographic museums was sealed that day. So now I gratefully and enthusiastically have two new strategies under my belt for my way forward exploring my beautiful Muslim culture and history as it seeded and bloomed around the world and the incredible lands and cultures that are the sisters and brothers in humanity. 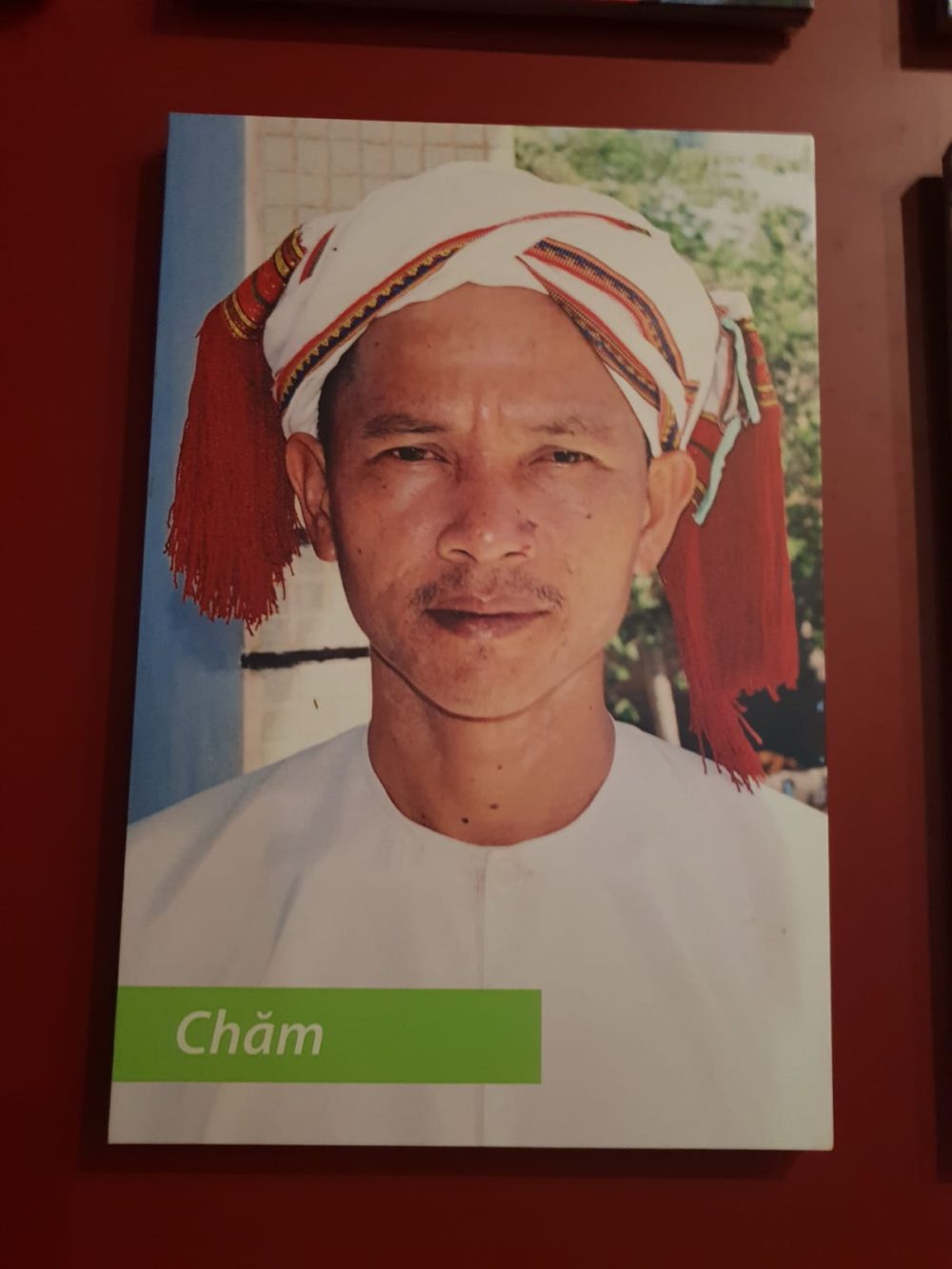 Wonderful photos that inform so well 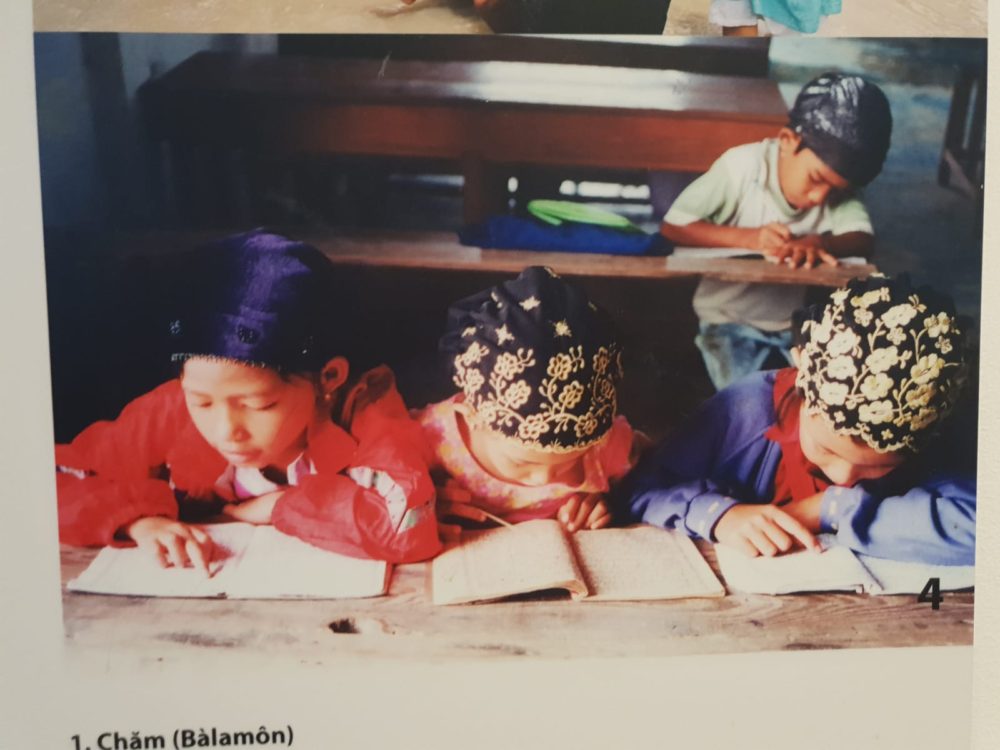 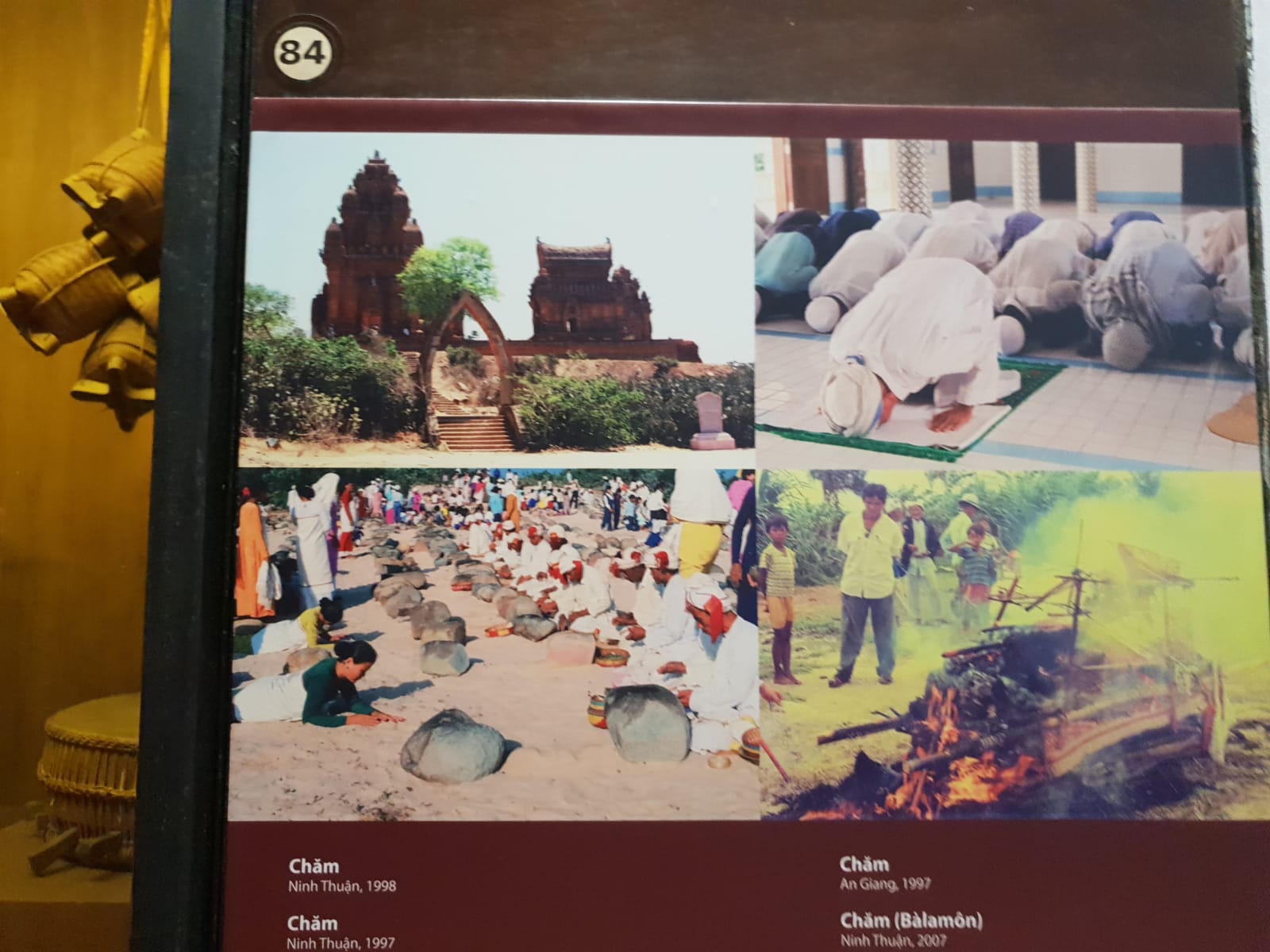 Top right a group of men in Sujood

Built in 1935, Saigon Central Mosque is one of 12 mosques in Ho Chi Minh City. It was originally constructed for worshipers from southern India then resident in Saigon, but now Muslims from all over the world go there to worship. It is usually crowded on Fridays.

Furthermore you can also find halal food like bread and biscuits just outside the mosque or cross the road to a restaurant that serves Vietnamese halal food.

The Jamiul Islamiyah Mosque, also known as the Nancy Mosque, is one of the main mosques in Saigon.  There is a sizable Muslim community living around this mosque. You can also find some halal food like Pho Muslim around this area if you are willing to walk around the back alleyways.

Cholon Mosque was built in 1932, initially to serve Muslims from Southern India who migrated to the area, and is one of four mosques serving Muslims in central Saigon. The simple lines and color scheme of the building makes a striking contrast from the elaborate pagodas on the same street. Visiting the mosque might be best timed around lunch or dinner, as a tasty halal restaurant is located on the grounds. 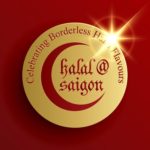 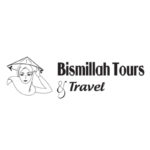 Specialized in serving Islam, Bismillah Tours and Travel was founded in 2014. They were one of the first companies to offer Halal packages in the country and their local Muslim team welcome all religions to learn and explore Islam in Vietnam.

Exploring Islam in Vietnam
Go back to home
Mosques in Vietnam