Stitchez – A touch of modern embroidery Stitchez – A touch of modern embroidery

My heart delights at the creativity of youth in the space of Muslim or Arab culture, and this gem certainly shows how the new generation is carrying on the traditions of the older generation beautifully.

It came to light during Ramadan, when I realized that I needed more prayer clothes as hosting iftars normally means larger numbers of people than usual praying together. I missed the two-piece prayer clothes which I grew up with from the Levant, as lately, I had been using the lovely one-piece style popular in the Gulf. I love both just as much, as they are each practical in their own way.

The sense of nostalgia was still in my mind a few days later, when a dear friend of mine, who has a lovvvely cheeky humor, messaged me saying that she wanted a new set of prayer clothes from me to replace the ones I gifted her a couple of years ago. She shared that the reason she was asking, was because with my gift of the previous set she had started praying consistently and now the two are connected for her in her heart and she wanted me to get the blessings of always praying with sets I gift her.

That night, I went to a huge iftar and sat with a dear friend who I hadn’t seen in a while, and she had to excuse herself from our catch up to go home and receive the niece of her friend who was designing and selling prayer clothes. Imagine that! The way these seemingly small synchronicities of needs met so beautifully and easily reassure my heart and make it overflow with gratitude and peace, knowing God is Looking out for me. That what is good for me and meant for me will be mine by a single stroke from His Will. And what He Holds back is by His Mercy and Wisdom. I spoke shortly to Zeina and made a small order to see if I liked it.

She passed by to deliver it a week later, right before another iftar I was hosting and she was as lovely and charming as my friend had said. I loved the prayer clothes! What made them so wonderful, was the embroidery that nodded to the age-old custom of the Levant and the fabulous sorbet colors, as well as the standard off-white and less common soft pink green or blue. I have to say, I never thought to pray in fuschia!!! But the image triggered by seeing the set got me laughing and liking the idea. 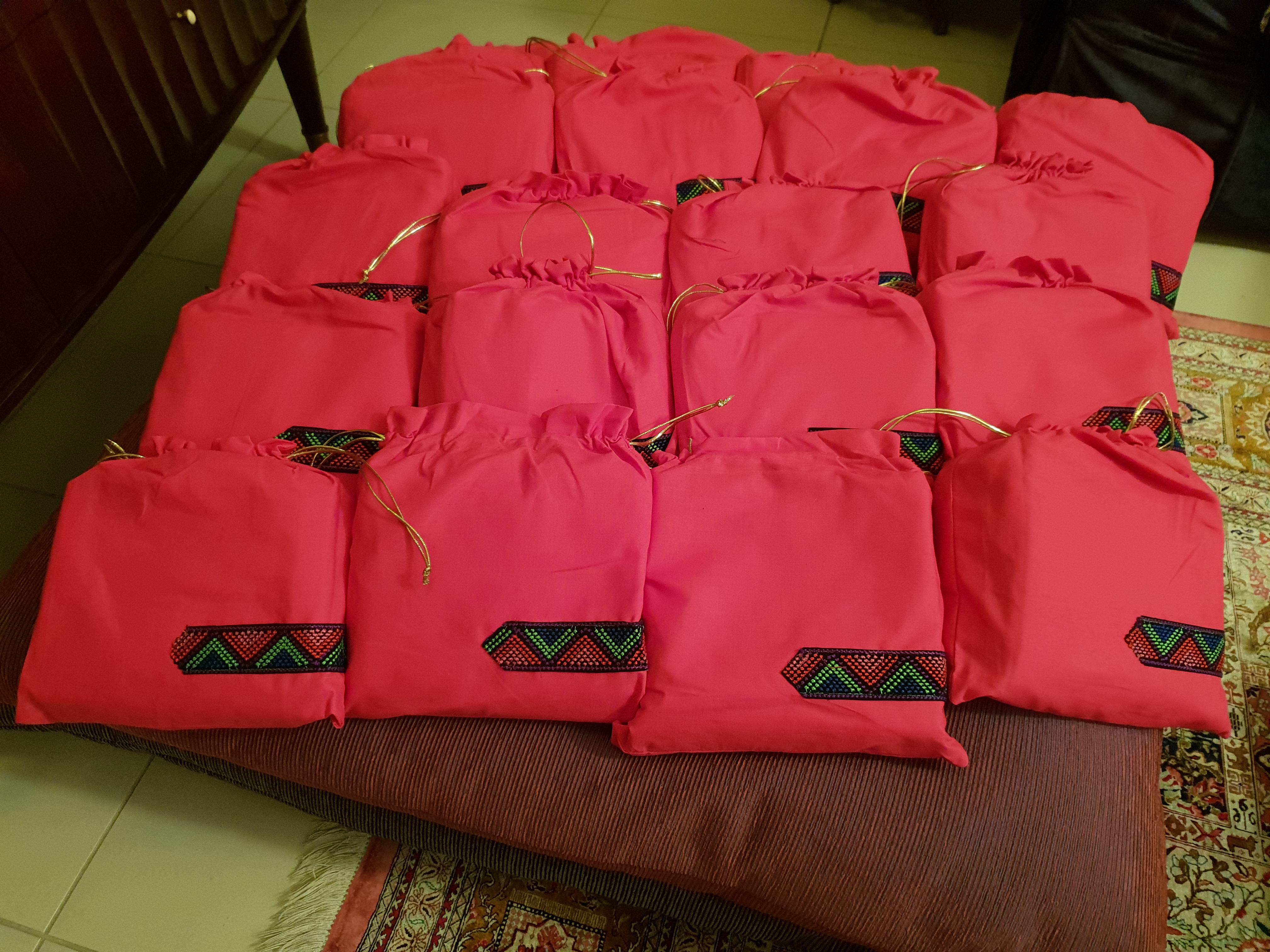 Can you tell I was partial to the fuschia, haha

I ordered more. I mean more, haha, especially for dear friends who don’t have access because they live in the West. And, also with mothers and daughters in mind and the hope that maybe, just maybe the funky clothes could make prayer more exciting to young girls starting to form the habit of praying. 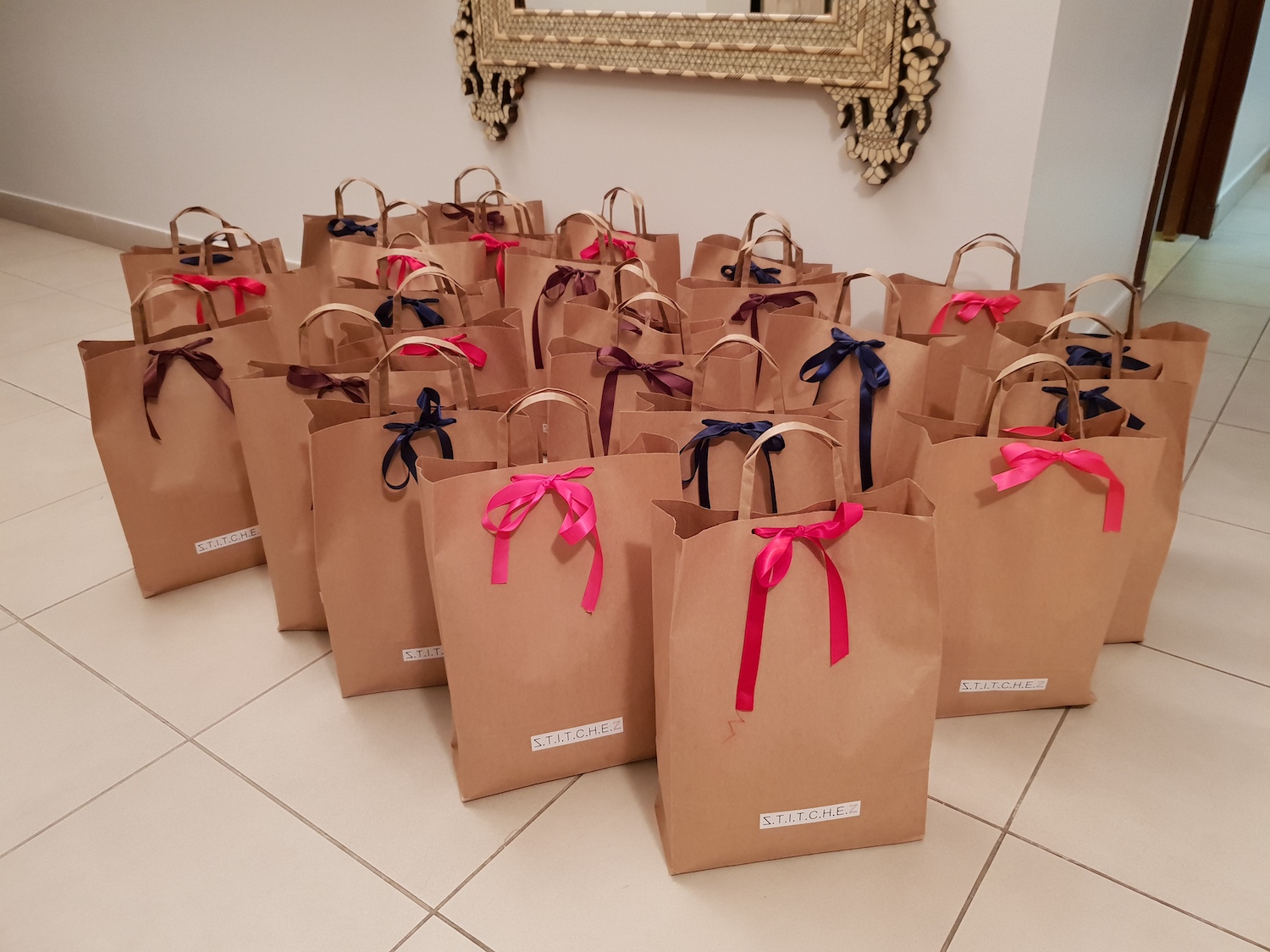 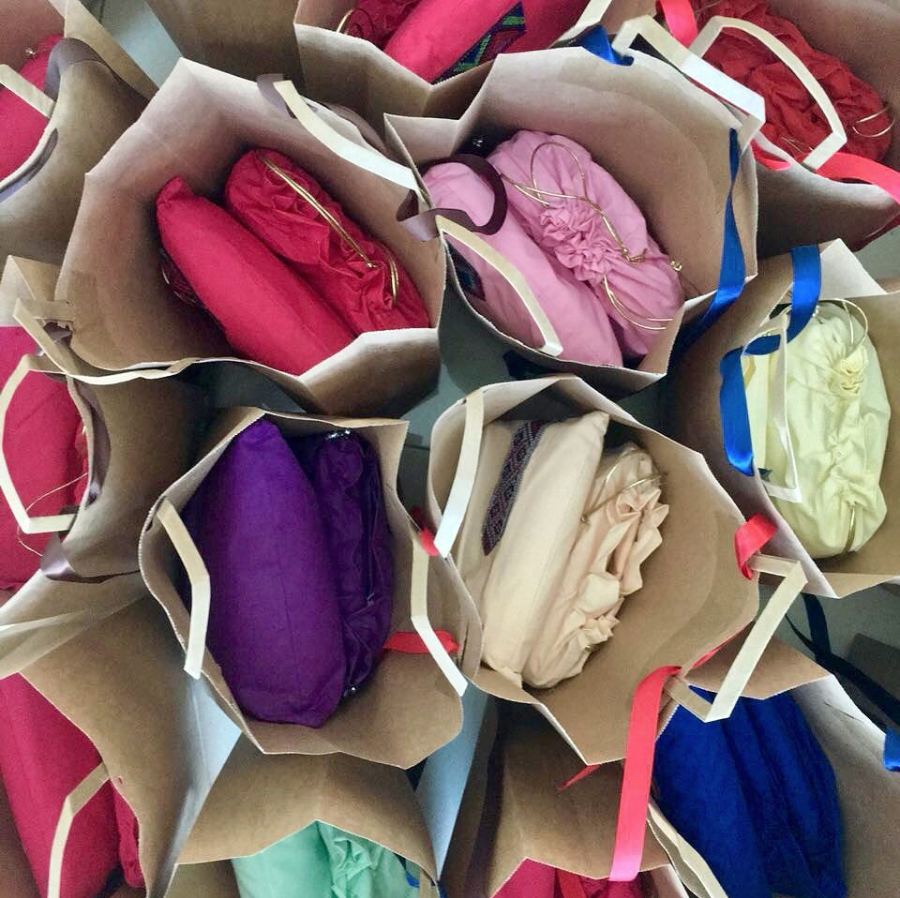 Fun to open up and look at the colorful bouquet 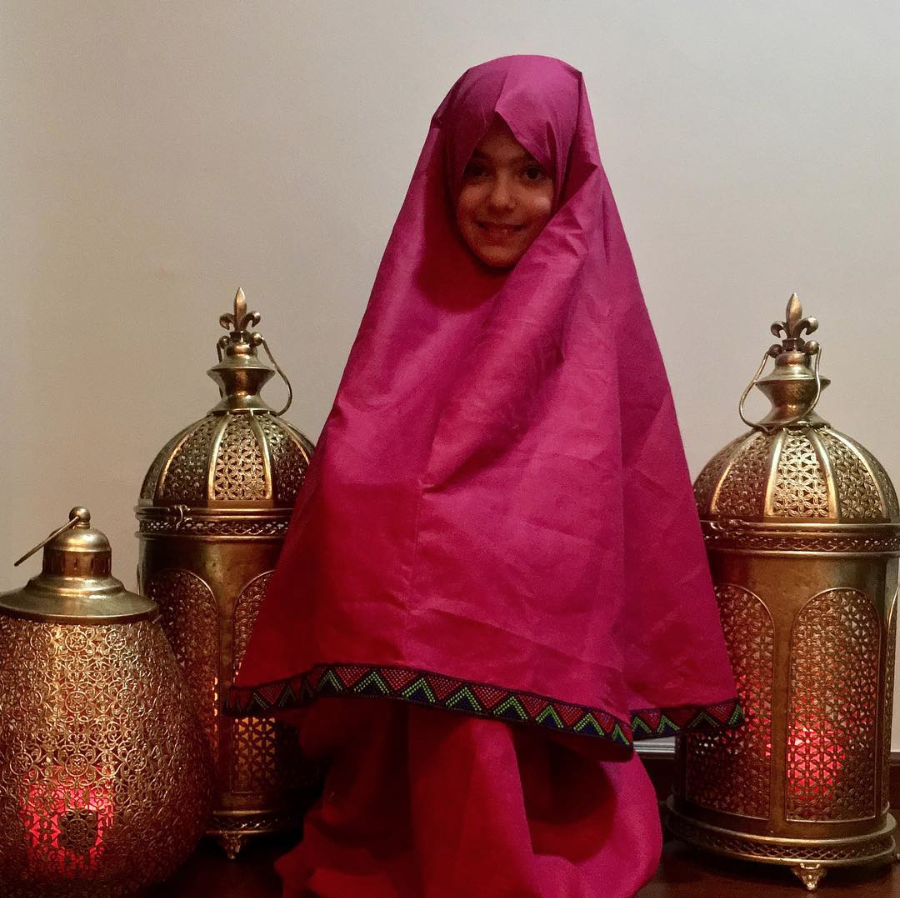 A lovely young lady in her new prayer set

I asked Zeina if we could meet so I could interview her for a post, and she graciously accepted. She also asked if her husband could come along as he was part of the project. It turns out that Ahmad is the designer who implements Zeina’s ideas. It is a perfect job for him, being an architect with a great eye for beauty and detail.

This was getting better and better, as I love family teams of husband and wife or siblings, as they can be so rewarding if the challenges are met with mutual love, patience, and appreciation. I work with my sister and count that as one of my biggest blessings. She really and truly has my back and our skills are so complimentary, Alhamduli Allah!

During the interview, Zeina began to tell me how they had first identified a niche in the market when she was looking to buy a portable prayer set for herself so she would not need to use the general use ones placed in prayer rooms.

Not being able to find a set in Dubai, she widened her search to Amman. And, when a friend going on Umrah also mentioned that she was struggling to find a set, she realized she wasn’t the only one with the need. Seeing the potential to be able to support so many women, Zeina set to work bringing the project to life.

The first challenge was where to produce the garments, but as luck had it, the perfect support came forward in the form of Zeina’s mother in law. Her mother in law had volunteered with a non-profit organization helping people with special needs to make and sell crafts. But, due to budget cuts, the initiative had closed. Zeina asked her if she was willing to overlook the production part and she said yes, so they started with three women and a sewing machine that her mother in law owned. Two women made the clothes and one designed the initials as they are an option on the bag. They wanted to start small to guarantee a steady income for the team.

The expression on Zeina’s face as she mentioned the number of trial and errors to reach the final product was priceless, as it showed the labor pains involved shipping back and forth, especially when, repeatedly, details and colors were not what they seemed on a photo.

Design wise, they wanted to stay traditional with simple patterns for the embroidery. Some they found to suit the colors and others where developed by Ahmad and tested with different color thread. The logo was also fun to talk about as Zeina pushed for color and got it in the z part of Stitchez which is befitting as it’s the s turned to z as her husband’s tribute to her and her idea. 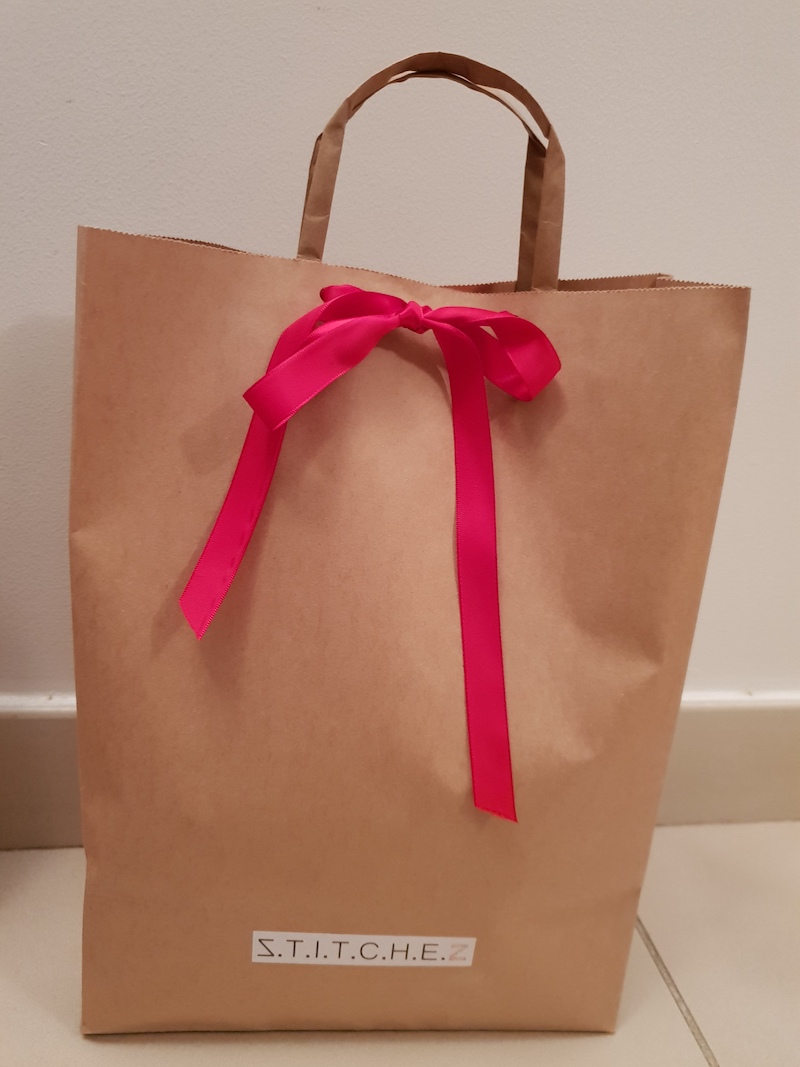 a close up of the logo and the Z

Having finally resolved most of the snags, they began selling in Ramadan. They eagerly asked customers for feedback to make sure they were delivering the highest quality. Now if that’s not an Islamic attitude, and a universal value, that helps success happen by virtue of its openness and stamina for improvement I don’t know what is!

I just loved their attention to detail as some prayer clothes, for example, are see through which defies their purpose of covering in a way that is appropriate for prayer. And Zeina mentioned that people go in it to the mosque with their pajamas on in Ramadan so that doubly meant it couldn’t be see through. 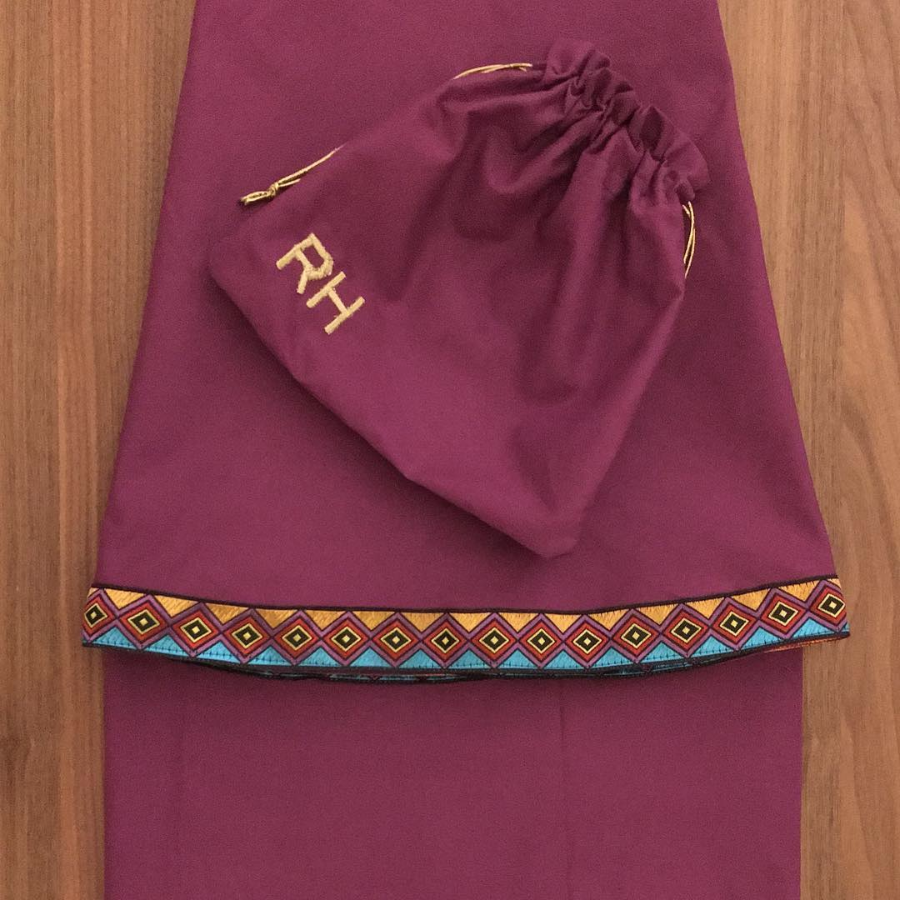 Initials as an option are another fun little detail

I asked about the demand and they said it’s seasonal in Ramadan. People have become bored with taking sweets as gifts, so the bright and modern take on a traditional prayer set is a perfect healthy alternative!

Now, they have even expanded the range of items they offer, adding a prayer mat, which I just loved. The minimal design is very clever, because it cuts away from the full size of a traditional prayer mat enough to make it portable, while in the same stroke still serving the functions of pointing to the Qibla and being big enough to prostrate on without any part of the body touching the floor. It also shows the side where one should put their feet, time after time. Because no one likes to put their head where feet have been. That fabulous eye for detail again! 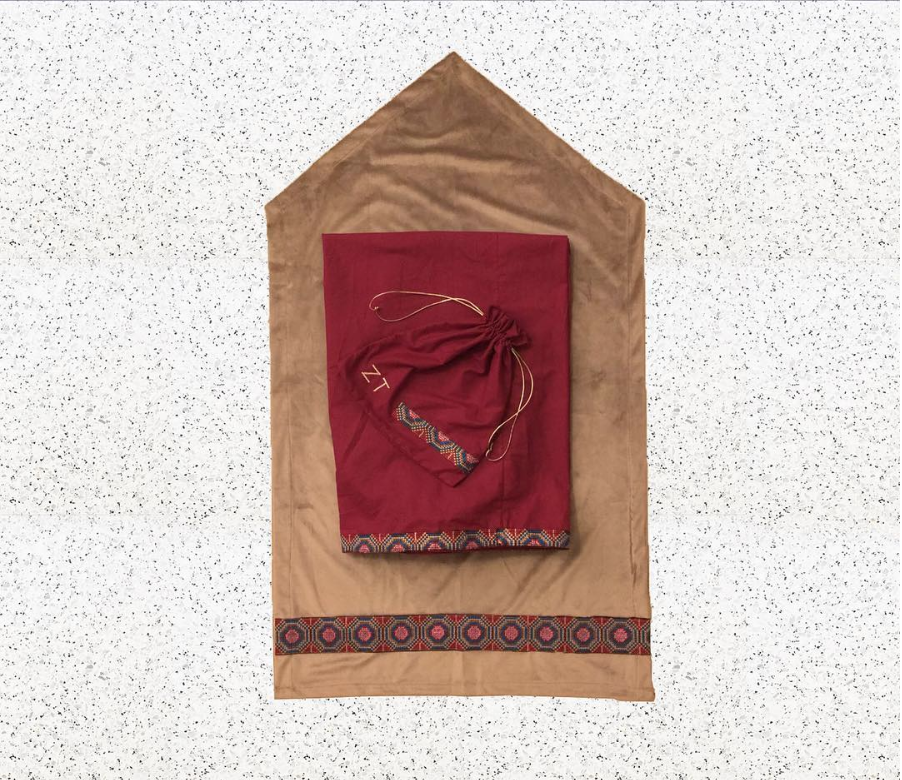 They ended on the sweet note that they are so happy that every time someone prays on that mat or uses the prayer clothes they get blessings. Awww what a shining example of smart talented youth connecting to their tradition and values and upholding them while adding their creative aesthetic and that of their times! Best of luck to you Zeina Ahmad and to Stitchez. I know there are other products coming up and I for one will definitely be watching that space. 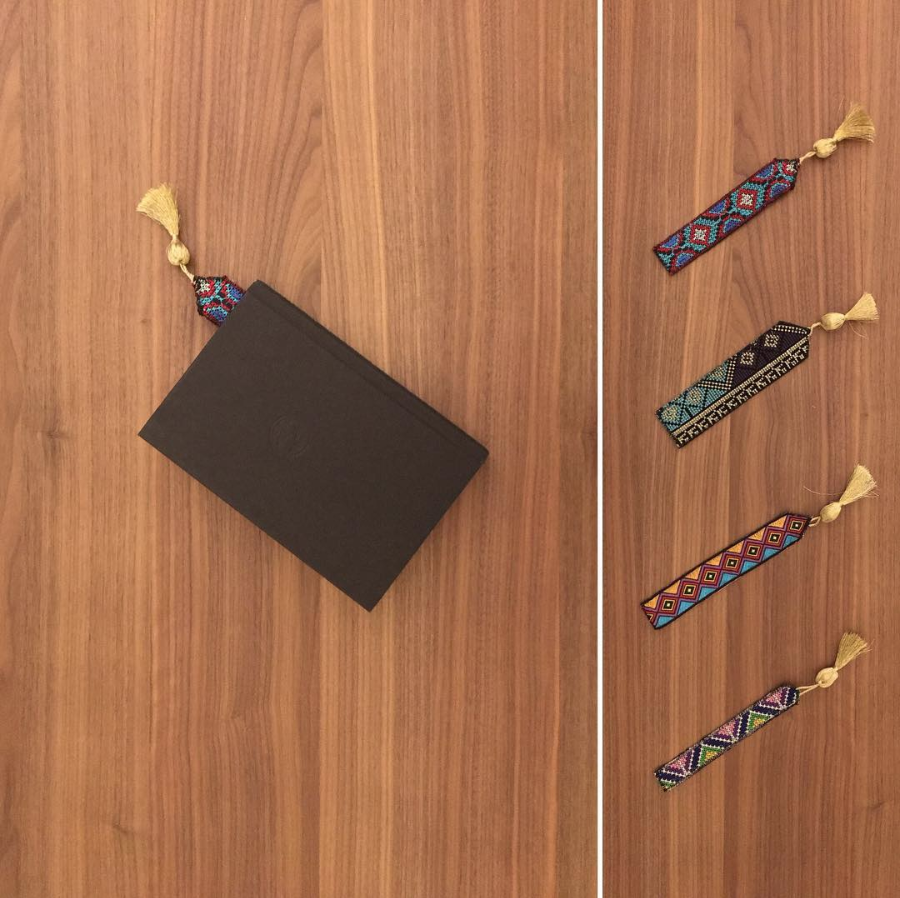 Book marks of different sizes are out!

Created by husband and wife team, Zeina and Ahmad, Stitchez is a home-grown company providing Muslims with portable and stylish sets of prayer clothes that they can use when outside of the home. Great care, consideration, and attention have been crafted into each of the sets and they are perfect as traditional gifts with a modern twist. Discover their full range of products on their Instagram page and send them a direct message to order.